Our Patriarch, Alexy II is dead, the day has set on a bright sun 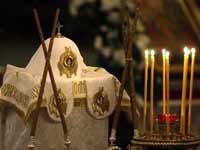 Our Patriarch, Alexy II is dead, the day has set on a bright sun

Alexy II, the 16 th Patriarch of Russia, the Holy Third Rome, was born in 1929, 23rd Feb. under the name of Aleksey Ridiger, in Tallinn, Estonia, Soviet Union to Russian Germans. He became a monk at an early age, under the Soviet system. This in and of itself took great courage and was viewed poorly by the authorities. He graduated the Leningrad Theological Academy in 1953 after first having graduated the Leningrad Theological Seminary in 1947. On April 17, 1950 he became a priest, all this in the era of Stalin's second round of paranoia.

He reached the rank of Archpriest on August 17, 1958 and in March 30, 1959 returned to Tallinn as the dean of the Tartu - Viljandi deanery. He became the Bishop of Tallinn and all Estonia in August 14, 1961. By age 39, on February 25, 1968, Alexi II became Metropolitan. In 1986 he became the Metropolitan of Novgorod (the original first city of Kieven Rus and all the Rus) and St. Petersburg. In 1990 he became the Patriarch of all of Russia. The vote, for the first time in Soviet history (which had less than 2 years left), was totally without government interference.

Since then he had been the driving force that has brought back the Orthodox Church into the center of Russian culture and life, while moderating the more radical elements within it. He made Christianity and Christian morality the prime focus of tens of millions of Orthodox Christians in Russia and around the world, bringing a Christian revival that is second to none. The Grand Mufti of Tatarstan was even once quoted as complaining to then President Putin that to many Tartars were converting to Orthodoxy from Islam.

Even before the Soviet Union collapsed, Alexi II was a loud advocate for freedom of religion and education without ideological or governmental interference. During the aborted coup and final struggles of the Soviet hardliners, Alexy II was a strong voice for the end of the Soviet regimes. Alexy II stood before the coup's troops and with a loud speaker called upon them to refuse to fire upon the citizens, which in the end they did.

One of the great accomplishments of this Holy man was his guidance and work in successfully unifying the Orthodox Church of Russia and the Russian Orthodox Church Abroad, bringing both great organizations in union with each other as they are with God and was accomplished in 2007, despite the efforts of the American CIA to derail this.

Alexy II led a long effort to recognize the victims of the Soviet genocides and to raise the memories of these Christian martyrs, to include the Saint Tsar and his family, to the conscious mind of the public.

He was also an outspoken critic of the homosexual "life style" and as such had earned the hatred of many of the West's elites. His efforts in blocking the Pride Parades in Moscow have only further driven their hatred of this holy man. It should be noted though, that at no time did the Patriarch call for violence against this abnormality, but pastoral counseling and love.

Equally, the Patriarch worked hard to ease the anger amongst Russian Orthodox against Russian Muslim citizens, following the various terrorist acts, through Russia's past 17 years of history.

May the Lord in His eternal mercy, take and hold dear this blessed of men and give him the eternal rest that he has earned for a life time of work and effort and trials. For your blessings, our Holy Father, do we pray.

The article was reprinted with the kind permission from Stanislav Mishin and originally appears on his blog, Mat Rodina