Russians believe in life on Mars

Russians believe that in the future it will be quite possible to construct space station on the Moon, but not on the Mars. Fifty nine percent of Russians is sure that life on the Mars doesn’t exist. Twenty six percent disagree. Sociologists found out who these people are. 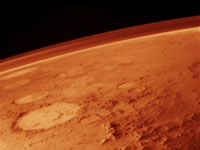 Russians believe in life on Mars

People that believe in life existence on the Mars are most commonly the citizens of big cities under 25 with middle education (28) and relatively low income (32). Such results were gathered on the Cosmonaut’s Day, when 2500 people were polled in the streets.

The chances to build the permanent space station on the only Earth’s sputnik - the Moon are relatively the same: 16 percent say it will be constructed in 10 years, 26 percent hope to see it in 30 years and 33 percent predict it will be in more than 50 years, RIA- Novosti reports.

One in ten people doesn’t believe that the Moon will ever be inhabited. The distance between the Earth and the Moon is 238855 miles .