An American man who fell into a coma after his skull was crushed from a brutal mugging and beating six years ago has been partially reawakened by US neuroscientists. 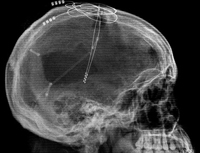 After some time in hospital after the beating he improved to what is known as a minimally conscious state, which meant he had very limited movement and awareness.

But his parents began to lose hope and gave doctors the order not to resuscitate him if his condition worsened.

Then he was selected for an experimental treatment where electrodes were implanted deep into his brain to stimulate it and now, after years laying in a hospital bed, the 39-year-old can communicate and even play cards.

Neuroscientists say the research, which has been published in the journal Nature, is exciting and offers hope to other people suffering from traumatic brain injury.

Dr Ali Rezai from the Centre for Neurological Restoration at the Cleveland Clinic says the man has made significant improvements:

The man's parents do not want him to be identified, but his mother has spoken, saying she always knew at the back of her mind that God would not let her down, abc.net.au reports.

Before his injury, the man—whose identity was not disclosed—loved to draw, collected comic books and fancied movies about superheroes.

"His skull was completely crushed and he was left for dead," his mother told reporters in a telephone briefing.

He spent the next five years in a nursing home with no hope of recovery. He would occasionally mouth the word yes or no, but could not communicate reliably or eat on his own.

His parents agreed to try the experimental treatment in August 2005, and doctors saw immediate results.

He was alert and could move his head to follow voices.

He can now drink from a cup, recall and speak 16 words, and watch a movie.

Rezai said he is engaged with his family, playing cards with his mother and taking short trips outside the facility.

Because of years of immobility, he may never walk.

"He still has got a long way to go, but given where he was, he is dramatically improved," Rezai said.

The man is the first of 12 patients who will undergo the treatment as part of a pilot study approved by the U.S. Food and Drug Administration.

Experts believe about 100,000 to 300,000 patients with traumatic brain injury may be in a minimally conscious state. Most do not receive active therapy, but Rezai and colleagues think this may need to change, Reuters reports.