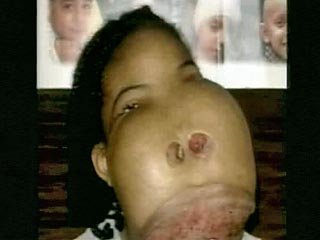 The teen, Marlie  Casseus, suffers from a rare form of Polyostotic Fibrous Dysplasia, a nonhereditary, genetic disease that causes bone to become "like a big a bowl of jelly with some bone inside," according to University of Miami School of Medicine's Dr. Jesus Gomez, one of a team of nearly a dozen specialists performing the 14-hour procedure.

Gomez said doctors would start with the left side of Marlie's skull and carve away the ballooning fibrous mass that has stretched and distorted her face, spreading apart her teeth and all but obliterating her features, the AP reports.

The global media attention Marlie's case received motivated thousands of people from across the United States and countries across the globe, such as Iceland, Latvia, China, the United Kingdom and Sweden, to donate to the International Kids Fund, the charity sponsoring Marlie's medical care at Holtz Children's Hospital, part of the University of Miami/Jackson Memorial Medical Center. The organization has reached its goal for the first surgery and continues to raise money for the subsequent operations Marlie will need to regain her face, all of them offered at charity rates at the publicly funded hospital.

If the operation is successful, doctors will seek to reconstruct the right side of her

face and then later reconstruct her swollen jaw. Doctors have performed such operations before, but rarely on a growth so big, Gomez said. Only about 3 percent of the 150,000 people diagnosed with the disease worldwide suffer such an extreme condition.

Marlie is the middle of three sisters, said Josephine Mora, community outreach manager for the Jackson Memorial Foundation's International Kids Fund. The fund raised $95,000 to underwrite Marlie's treatment, which will include restructuring her jaw, a process that will cost her teeth, one of which protrudes through her hugely swollen bottom lip.

This operation lasted about 16 hours, but, unfortunately, it is only one in the series of operations, which are in store for the poor girl. Experts say that the girl's state of health is critical and that she must stay at very close surveillance.