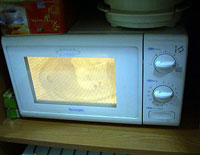 There was a lawsuit in 1991 in Oklahoma. A woman named Norma Levitt had hip surgery, but was killed by a simple blood transfusion when a nurse "warmed the blood for the transfusion in a microwave oven!"

Logic suggests that if heating is all there is to microwave cooking, then it doesn't matter how something is heated. Blood for transfusions is routinely warmed, but not in microwave ovens.

There have been very few scientific studies done on the effect of eating food microwaved food. This is rather surprising when you think about the fact that microwaves have been with us for only a few decades - and that in that time the incidence of many diseases has continued to increase.

Two researchers, Blanc and Hertel, confirmed that microwave cooking significantly changes food nutrients. Hertel previously worked as a food scientist for several years with one of the major Swiss food companies. He was fired from his job for questioning procedures in processing food because they denatured it. He got together with Blanc of the Swiss Federal Institute of Biochemistry and the University Institute for Biochemistry.

They studied the effect that microwaved food had on eight individuals, by taking blood samples immediately after eating. They found that after eating microwaved food, haemoglobin levels decreased. "These results show anaemic tendencies. The situation became even more pronounced during the second month of the study".

Who knows what results they would have found if they had studied people who ate microwaved food for a year or more?

The violent change that microwaving causes to the food molecules forms new life forms called radiolytic compounds. These are mutations that are unknown in the natural world. Ordinary cooking also causes the formation of some radiolytic compounds (which is no doubt one reason why it is better to eat plenty of raw food), but microwaving cooking causes a much greater number. This then causes deterioration in your blood and immune system.

In addition, they found that the number of leucocytes increases after eating microwaved food - something which haematologists take very seriously, because this is often a sign of highly harmful effects, such as poisoning.

The results were published in "Search for Health" in the Spring of 1992. How was this research greeted? A powerful trade organisation, the Swiss Association of Dealers for Electroapparatuses for Households and Industry somehow made the President of the Court of Seftigen issue a `gag order'.

Hertel and Blanc were told that if they published their findings they would face hefty fines or up to one year in prison. In response to this, Blanc recanted his findings. Hertel, on the other hand, went on a lecture tour and demanded a jury trial.

After the World War II, the Russians also experimented with microwave ovens. From 1957 up to recently, their research has been carried out mainly at the Institute of Radio Technology at Klinsk, Byelorussia. According to US researcher William Kopp, who gathered much of the results of Russian and German research - and was apparently prosecuted for doing so the following effects were observed by Russian forensic teams:

1. Heating prepared meats in a microwave sufficiently for human consumption created:
- d-Nitrosodiethanolamine (a well-known cancer-causing agent)
- Destabilization of active protein biomolecular compounds
- Creation of a binding effect to radioactivity in the atmosphere
- Creation of cancer-causing agents within protein-hydrosylate compounds in milk and cereal grains;

2. Microwave emissions also caused alteration in the catabolic (breakdown) behavior of glucoside - and galactoside - elements within frozen fruits when thawed in this way;

3. Microwaves altered catabolic behavior of plant-alkaloids when raw, cooked or frozen vegetables were exposed for even very short periods;

5. Ingestion of micro-waved foods caused a higher percentage of cancerous cells in blood;

6. Due to chemical alterations within food substances, malfunctions occurred in the lymphatic system, causing degeneration of the immune system=s capacity to protect itself against cancerous growth;

7. The unstable catabolism of micro-waved foods altered their elemental food substances, leading to disorders in the digestive system;

8. Those ingesting micro-waved foods showed a statistically higher incidence of stomach and intestinal cancers, plus a general degeneration of peripheral cellular tissues with a gradual breakdown of digestive and excretory system function;

As a result microwave ovens were banned in Russia in 1976; the ban was lifted after Perestroika.