A cat or a dog a day keeps a doctor away

It was probably in the Stone Age that animal therapy was practiced for the first time by humans. At that, people of that epoch had no notion that it was ‘animal therapy’ when they were stroking their tame dogs and cats . Many of us also do not know that patting cats and dogs brings us not only pleasure but is very good for health. 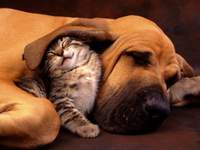 A cat or a dog a day keeps a doctor away

Cats wonderfully help relieve people from stress and fatigue . American psychologist Boris Levinson was the first to apply the notion ‘animal therapy’ to the ordinary process of caressing animals between their ears. The notion appeared first in the 1960s. And the psychologist began to use the method for treating children suffering from autism. At that, Levinson’s method was not an absolute innovation at all. It is known that in the 18th century doctors of the psychiatric hospital York Retreat in England were keeping cats, dogs, rabbits and birds especially for treating their patients. The hospital’s head physician believed that taking care of animals gives his patients lots of positive emotions.

Feline therapy or treatment with the help of a cat is the most popular. It is curious but everything in cat’s behavior turns out to be healing for humans. A cat’s purr at a frequency of 4-16 Hz in some way improves people’s immunity . Cats have the mysterious ability of identifying people’s aching organs. When a cat feels that her owner has something ailing in the organism it settles down close to the person, purrs, tramples him down and from time to time slightly scratches him with its claws. Good feline therapy helps relieve people from stress, fatigue, sick headache; it brings down blood arterial pressure if it is too high, normalizes pulse, and also eases pains caused by rheumatism and stomach ulcer . Those who propagate feline therapy insist that different breeds of cats can treat various diseases. Fluffy cats such as Persian cats are wonderful for those who suffer from osteochondritis, neuralgia or insomnia. People with diseased liver or kidneys, those who suffer from gastritis or colitis should have a smooth-haired cat. What is more, it is know87n that she-cats are good treatment for neural ailments while tom-cats better treat radiculi4tis, arthrosis and the like.

Dogs stand second after cats on the list of animal therapists. People who walk their dogs several times a day do not suffer from hypodynamia. Also, a dog’s saliva contains lycozyme, an anti-infective agent that helps wounds heal within a very short period of time. Big dogs have a high-activity alpha rhythm, so patients with cardiac insufficiency can hold their hands for at least half an hour a day close to a dog’s heart to feel better.

Horse riding is the third popular therapy after feline and canine therapies. Hippocrates said that sitting in a saddle saves from gloomy thoughts. Horse riding is a perfect treatment for rehabilitation of patients having spinal traumas, muscular dystrophy, paralytic legs and arthritis. In England, horse riding therapy is used even for treatment of drug addicted patients. Therapy involving dolphins is good for psychological rehabilitation of patients after traffic accidents. In Africa, elephants help people cure some diseases and kangaroos act as therapists in Australia.

Unlike cats that enjoy the process of treating their masters, dogs experience ailments of their masters too emotionally and wonderfully demonstrate their devotion to people.

It is interesting that families having dogs of any breeds know how to cope with conflicts easier. Experts add that breed of a dog also matters for treatment of any particular disease. People having grave psychological problems need a quiet friendly dog such as Labrador, golden retriever and Shar pei. The latter is especially good for hot-tempered, unbalanced people and those who have hyper tension and suffer from frequent headaches. German sheep dog and Central Asian sheep dog help rehabilitate coordination of movements after traumas. These dogs teach patients with locomotorium problems to walk. Families who want to keep a dog to treat or amuse their children should consider such breeds as collie, St. Bernard, Newfoundland dog, Mittelschnauzer, Riesenschnauzer, boxer and Airedale terrier who can wonderfully perform the role of a babysitter . A good-natured and lively spaniel can be a good friend for an active baby. It is astonishing that Chinese crested dog is a therapist who can relieve its master from a wide range of diseases: asthma fits, blood pressure problems and cardiac rate, it also treats allergy, some skin diseases. Some experts say that such dogs slow down the clinical course of cancer.