Unfortunately, Russia is one of the leading countries of the world on the number of suicides. About 60,000 Russians decide to bid farewell to life at their own will every year. The number of suicide incidents in Moscow alone reaches 30 occurrences daily, although they end with five or six lethal outcomes, as a rule. It has been registered over the recent several years that the majority of Russian self-murderers are educated, intelligent and creative individuals. 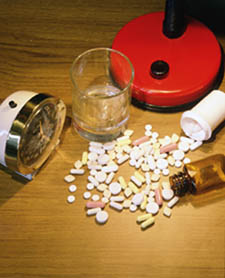 Suicides committed by Western celebrities have always received intensive coverage and global reaction in the media: Marylyn Monroe's death in 1962, or Nirvana's frontman Kurt Cobain in 1994, for instance. Psychologists, fans and everyone else in general were shocked to know that creatively successful and financial secure personas decided to kill themselves at the peak of their carriers. Specialists tried to explain it with drug and alcohol addiction, as well as with psychological frustration and nervous breakdowns, which artists and writers could probably experience. However, their deaths will remain mysterious forever.

The Christian morality traditionally views suicide as mortal sin, although the Bible does not condemn suicide at all. Nevertheless, the Western civilization considered this point of view as a fundamental and obvious principle, which was legally substantiated later. “Unsuccessful” self-murders so to speak would be called into criminal account in England before 1961. A person would be sent to a mental institution after attempted suicide in other countries: doctors used to classify such people as mentally unbalanced individuals.

Modern psychiatry does not connect suicide with psychological disorders, which may take place only in separate occurrences. Nowadays, specialists explain the phenomenon with a person's aspiration to get rid of commonness and boredom of every day life and make a step beyond reality. According to Sigmund Freud's “Theory of the Mind,” every individual possesses instincts of creation (Eros) and death (Thanatos). Dr. Freud explained suicide with an adequate reaction of a person to chaotic and destructive environment and the impossibility to continue existence in it.

The philosophy of existentialism affected and changed the attitude of the Western community to suicide greatly. Philosophers wrote about the absurdity and emptiness of human existence in the extraneous Universe. The work by Martin Heidegger, “Existence and Being,” the most important philosophical book written in the 20th century, has the largest significance at this point. According to Heidegger, death brings all human wishes and actions to nothing. One may turn a blind eye on this or that fact, but such position creates artificial life. Death is the only real matter, which deserves human attention. According to Heidegger, a tendency to suicide is the ontological essence of human ego.

American specialists use this standpoint to explain the growing number of suicides, which outwardly successful people commit in the USA. Allen Myerson, the business editor of New York Times, jumped off from the 15th floor of the newspaper's building in 2002. It was Mr. Myerson, who launched one of the largest scandals in the US economy, in which energy giant Enron was involved. Popular jazz singer Susannah McCorkle committed suicide having jumped off a high-rise building prior to the release of her 19th album. There can be a lot of other similar examples found in history. Few people were surprised with the statement from the prominent film director and screenwriter Ingmar Bergman, who said that he was going to commit suicide instead of waiting for his natural death to arrive.

If Mr. Bergman were living in Russia, he would be hospitalized against his own will, according to the Russian law. However, the number of suicides has been growing in Russia steadily. Psychologist and sociologist, Vladimir Onuprienko, believes that people decide to commit suicide over their disappointment in life, or inability to handle stresses of big cities. Someone of them thinks that death is a start of a new life.

Japanese culture and literature exerted a large influence on the growth of the number of suicides both in the West and in Russia. Committing suicide is traditionally considered to be an adequate end of life in Japanese culture. Outstanding Japanese writer and playwright, Jukio Misima, used to be an ardent proponent of suicide; the suicidal theme can be found in the works of a very popular Japanese writer, Haruki Murakami.

The development of the worldwide web created the virtual culture of suicide. There are over 200 suicidal websites in Japan, for instance: the pages offer their visitors adequate instructions, forums, etc. The fashion trend of cyber suicide has reached Russia as well: members of virtual clubs committed suicides in Moscow, Omsk and Nizhni Novgorod.