We learnt at school that oxygen is good for the human organism. But at the time when we were schoolchildren we had no idea that oxygen therapy would some day become one of the most fashionable trends in medicine and cosmetology. Now it is the most favorite pleasure for those who choose a healthy life-style. 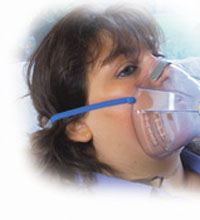 All cells of the human body need an uninterrupted supply of oxygen. But it turns out that our organisms get not really enough oxygen for their good activity because of the modern ecology, stresses, bad nutrition and smoking. As a result, metabolic processes in the organism are deranged; people suffer from premature ageing inside and outside and stand higher risks of cardiovascular diseases. To avert the troubles, we need to compensate for a deficiency in oxygen on time.

Today people can breathe in clean oxygen at oxygen bars. The first oxygen bar appeared in Las Vegas in 2001. Some bars add aromas to the oxygen therapy that gives two procedures at the same time, oxygen therapy plus aroma therapy. Going to such a bar gives good spirits and lucidity of mind. A special oxygen generator transmits air and concentrates clean oxygen. Then the device supplies it to bar visitors through special plastic tubes that look very much like a cocktail straw and a gas-mask hose combined together.

It is recommended to have 10-15 minutes of oxygen therapy a day. Doctors say there are no contraindications to the procedure, however longer procedures may entail oxygen poisoning. It will reveal itself in extreme fatigue, heaviness of body, weakness and drowse. The same happens after long walks in the ecologically clean areas such as Valaam or the Solovetskie Islands in Russia.

Five minutes of oxygen therapy at oxygen bars cost from 70 to 100 rubles (not more than $4) in Russia. Almost all of big Russian cities have oxygen bars either as part of sport centers or separate bars.

In addition to breathing with clean oxygen, some bars offer even to taste it. Oxygen cocktails first appeared in the Soviet Union in the 1960-70s as part of medical procedures at health centers. Now, interest in oxygen cocktails has been rekindled.

Oxygen cocktails are good for nervous system. They also make sleep better and fight the chronic fatigue syndrome. They are particularly attractive for people keeping to diets and patients having gastrointestinal tract diseases. Doctors say that together with oxygen cocktails the human blood and tissues get ten times more oxygen than the organism usually gets through inhaling.

An oxygen cocktail is soft thick foam made of glairs or other foaming substances. It helps normalize gut organisms; improves toxin excretion and metabolism. Thanks to the volume of its foam oxygen cocktails bring down hunger and also activate fat burning. It is believed that people stay thin longer if they loose flesh thanks to oxygen cocktails and never put on weight again.

Those who keep to starvation diets may try a so-called ‘oxygen diet’ which means that people must take five oxygen cocktails a day instead of meals. Some dietitians think that this diet within two days help purge intestines absolutely and renew microflora. This diet is as effective as a week of ordinary dietary starvation.

Sometimes, oxygen cocktails are saturated with licorice or hips extracts which helps cocktails actively stimulate people’s immune system. Having oxygen cocktails is innocuous; they are recommended even to pregnant women, little children and elderly people. Oxygen cocktails are particularly good for sportsmen. Hypoxia is typical of regular training as much oxygen is spent on intensive traction. To make training more effective sportsmen should make up for the oxygen ‘hunger’ and drink oxygen cocktails. They will also help escape fatigue that sportsmen usually feel when training is over.

Dermatological researches conducted within the several past years state that ageing is connected with a considerable reduction in the amount of oxygen in skin cells. As a result, metabolic processes in cells are getting slower; skin cells get less active, weak and old. To solve the problem cosmetics enriched with oxygen was invented.

When applied regularly, oxygen cosmetics forwards production of collagen and elastane that support the youth of skin; it also accelerates healing of wounds, helps fight inflammatory processes and allergy on skin thanks to acceleration of metabolic processes. Oxygen cosmetics are not more expensive than ordinary cosmetics of popular brands.