Russian scientists have discovered the cure for all diseases. 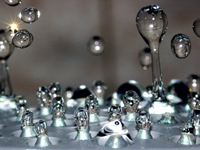 Such claims from the doctors in local clinics might seem absurd at first. But do not rush to conclusions. Researchers of two well-known Russian institutes have almost simultaneously without contacting each other come up with “live” and “dead” water. Both have equal chances to become the cure for all sicknesses! MK reporters went in for an interview and a sip of miracle liquid.

The de-ionized, or “dead,” water was first mentioned as a study project back in the 1990’s. At that time the theory of two professors from Science Center of Applied Research (SCAR) - Valentine Samoylov and Oleg Zaymidoroga – were looked at as fairytales. But now no one would dare laughing at the ones who take the foundation for their “live” and “dead” waters from… the kitchen!

“At first we were taking it from the ordinary kitchen faucet,” explains Oleg, the owner of a mini-lab in Dubna, “Of course it did not become de-ionized water right away. We had to free it of metal ions, microorganisms, and other junk. Please, have some! Where else on the planet would you be able to find water like this!”

“How did you discover its healing power?”

“It began with my experiments in Italy in the field of physics. I had to design such water for the research that would contain no radioactive traces and no microorganisms. So we began purifying the regular tap water. We passed it through the filter and then removed the 95% of metal ions. Then next step was to remove the rest of radioactive ions and from the heavy isotopes of oxygen and hydrogen. Finally we got rid of the dead bodies of microorganisms and ended up with super pure de-ionized water that is thousands of times more sterile than any artificial solution.

So I thought, what if I try to clean the incrustation inside the tea pot with that water? I took it to my wife and she poured the substance into the old boiling pot that had nearly one kilogram of old scales inside of it. After boiling the purified water in it all the incrustation came off. I realized all of a sudden that one could clean the polluted nuclear reactors this way, as well as the human body vessels. Just imagine how many people could be cured with such miracle water!”

The scientists immediately offered their product to the Surgical Institute of Vishnevsky and the St. Petersburg Institute RAN. Recently the biochemical tests have been completed. Believe it or not, the tests showed that the miracle water can cure infections and tumors.

“In the case of blood poisoning de-ionized water restores the torn DNA threads and helps the wound to heal faster,” the scientist explains, “As for the cancer, this water has the power to affect the bio-energetic molecule ATF, which is responsible for cell division. So when a cancer patient receives the de-ionized water injection the ATF molecule no longer misses the moment of random cell multiplication. The tumor growth will be stopped.

De-ionized water also has anti-diabetic qualities. The specialists from St. Petersburg confirmed that. They injected the rats with our water thereby stimulating the survival capacity of cells that produce insulin. The water is also useful for homoeopathic samples. This water can take on the qualities of medicines it interacts with and then pass on the healing effects to the patient.”

“So what will happen is we all start drinking such water on a regular basis, making tea with it?”

“That would be some very tasty tea because it will only contain the taste of tea leaves. But as for drinking the de-ionized water by itself, one should be very cautious doing that. I do this myself – 50 ml per day, and I almost forgot that I once had gastro-intestinal problems. But the thing is, if you drink too much of it will wash out all the calcium magnesium salt from the system and your knees will begin to hurt. This is medicine, and should be treated accordingly.”

“Have you tried talking to MinZdrav?”

“Sure I have, but it is too hard to shift the bureaucratic machine. So while I cure myself all alone, my wife uses the water with a cosmetic purpose.”

“De-ionized water can serve as make-up remover for the skin. Every evening my wife washes her face with it and begins looking much younger. We have received a permission to apply our water as a skin spray.”

As for using the magical liquid’s healing power in terms of taking on the qualities of the medicine it interacts with, this part awaits further research. The time approaches when we will cure our diseases with mere water.

Note: Water from blue bottles is dangerous for health

Scientists from the Center of Applied Research have concluded after launching large-scale experiments that the water in blue bottles can be harmful because after a time it acquires zirconium, a metal that gives the bottle a light bluish color.