Parents refused to believe their son who told them that spoons and forks could “stick” to his face. The parents were astounded after watching the phenomenon with their own eyes. Now they consider filling an application for the Guinness Book of Records. 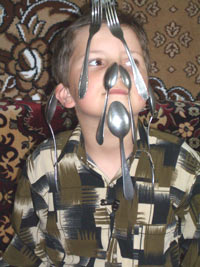 Misha Dulnyavka lives in the town of Turka located in a remote mountainous area of Ukraine. Border guards stop every incoming vehicle to check documents. It is small wonder since the area is just six kilometers away from the border. A taxi took me to the railway station. A flock of sheep was moving nearby. I asked a shepherd for directions. The old man motioned to a big white-brick house on the hill.

My driver did not want to take any chances on a muddy road after the rain so I had to get off the car and walked up the hill which rose steeply in front of me. A woman in her fifties emerged from the house and approached me. I introduced myself and began beating about the bush in an attempt to start up a conversation on the subject to be covered in my report. But my cautious ways proved to be unnecessary. The lady already figured out the purpose of my visit. The lady's name was Lyubomira. “There are four generations of our family living in this house, Misha is the youngest offspring, he is my great grandson,” said she. The boy entered the room and started talking about his town. “You are wrong if you think that the name of our town has anything to do with Turks,” said he.

The boy told me that he had repeatedly tried to draw attention of his family to the fact that he could attract a teaspoon to his face. He was walking about the house with a teaspoon hanging from his forehead. But the boy had the knack for telling tall stories and therefore his mom and granny paid no attention as they did their housework.

One day a circus arrived in town and all the schoolchildren were invited to attend the show. “Misha's eyes twinkled with a little bit of cunning as he looked up and told me: 'I can perform too, everybody will be amazed watching me hold spoons and forks on my face',” said Irina, the boy's mother. On that day Misha showed his wonderful talents to his mom. He hung a big tablespoon on his forehead, then a couple of teaspoons on his nose, a fork got stuck to his chin, and two big spoons hung on his ears. His mother said he could feel the force of attraction while putting those items over Misha's face one more time.

“My school teacher did not believe me so she brought her own spoon from home, she got very much surprised when it glued to my forehead,” says Misha.  The boy became a local celebrity after his dad and mom took him to a party where he demonstrated his extraordinary abilities. His performance won raves from the guests. A correspondent of a local newspaper happened to be among those guests. She invited the boy and his parents to the editor's office for a photo session. Now Misha carries a clipping from the newspaper in his backpack. The photograph shows the boy with lots of forks and spoons hanging on his face.

His next-of-kin began paying more attention to Misha's talents after they learned of one Jonathan Freedman, an 11-year-old boy from Oregon. Jonathan got into the Guinness Book of Records for his ability to hold 7 spoons on his face for 5 seconds. Misha's mother claims her son was holding 7 spoons on his face for 5 minutes. I asked her if the boy had been examined by the doctors. She said Misha was a sound boy but his abilities could not be properly studied in a local hospital since the town of Turka  is a very small town.

Lyubov Lozyuk, a candidate of biological sciences from the city of Lvov, Ukraine, says that the phenomenon is known as natural magnetism. According to her, humans and animals can possess extraordinary abilities to pull things. However, the force of attraction varies in every particular case. By all appearances, the boy has quite pronounced magnetic properties. Some people are reportedly capable of attracting metallic items weighing up to one kilogram.