Theme parks can be highly dangerous of children and adults alike

Summer in the city is the season of entertainment not only for children but for adults too. Crowds of people seek entertainment in a variety of attraction parks, although not many of them know that there are serious medical restrictions to ride attractions. Falling off a merry-go-round may result in a couple of bruises, whereas a ride on super-extreme roller coasters or overturning flying boats may lead to lamentable consequences for vacationers, including lethal outcomes. 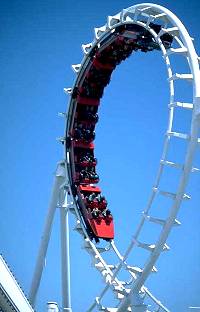 Accidents in attraction parks can be distinguished into several categories. The first one of them includes violation of safety regulations, when people try to get out of a moving amusement facility, unfasten seat belts, etc. The second category of accidents does not depend on holiday-makers – accidents may often occur because of technical malfunctions. The third category of misfortunes is strictly medical. It is connected with reactions of human organs and systems of an individual to a certain amusement facility in a park. A lot of factors depend on vacationer's health at this point.

A recent accident in Disneyland park in Florida, may exemplify a possible outcome of a ride in a theme park. A four-year-old child died when making a simulated rocket ride on “Mission: Space” attraction in the park. An emergency stop was not provided in the machine, and it became possible to take the child out, when the machine stopped working. The child died at a hospital, when doctors' lifesaving efforts returned no results. Similar accidents occur in theme parks all over the world on a regular basis.

As a rule, people do not think about what happens inside their bodies when they decide to ride an attraction that moves in all directions imaginable. It is worth saying, though, that a human being may suffer rather heavy loads during an attraction ride. A facility like Mission: Space exposes a person to a 2g-load, which is a serious test for physical capabilities of a human organism, especially if it a weak child.

Nausea and vomiting is the lightest consequence of an overload. Centrifugal acceleration may cause naupathia on any type of an attraction. The liquid of semicircular duct of the human vestibular apparatus flows from one side to another, evoking vertigo and other symptoms of sea-sickness. An upside-down position or intense swirling may result in much more serious consequences for many people, for heart patients, first and foremost. A possibility of a heart attack or a stroke is rather high in this case. Amusement parks are dangerous for epilepsy patients too. Rhythmical blinking of lights and loud music may easily provoke an epileptic seizure.

It does not even occur to some people that a sudden pang of stomach ulcer or exacerbation of subsided thyrotoxicosis can be directly connected with a recent visit to a theme park. A powerful release of adrenaline from adrenal glands, which people experience during attraction rides, may eventually become a provoking factor for a variety of chronic diseases. The fact of adrenaline release is obvious: people start screaming and yelling, others may even have a big wet spot on their trousers or skirts.

Furthermore, there is a certain group of individuals that may develop an addiction to theme parks and their attractions. Such mania for attractions can be comparable to drug or gambling addiction. The theme parks addiction has a hormonal nature: it develops sweepingly and may take a form of steady obsession.

It goes without saying that a strong refusal not to visit theme parks is the most powerful remedy to avoid all of the above-mentioned trouble. Theme parks are usually packed with people, though: riding a roller coaster is considered the best way to experience a whole bouquet of emotions altogether, such as infinite happiness, animal fear, ecstasy and so on and so forth. One should, therefore, be highly careful in the choice of attractions, especially for children. Safety rules were not invented to adorn box offices: they can be written with blood at times, when someone thinks that a seat belt is too tight, for instance.