The question is: given the viscosity of blood, how can the heart make it flow throughout all the capillaries, even the narrowest ones? We should take into account that the resistance opposing the movement of a fluid through the pipe is inversely proportional to a third power of its radius. 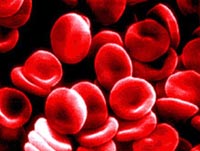 Indeed, humans and animals have blood whose viscosity is akin to that of glycerin.

Back in 1661, Marcello Malpigi discovered the microscopic capillaries, and red blood cells in a specimen of a live tissue. Anthony Levengouk discovered them too later on. Capillaries were called in Greek – erythrocytes – i.e. red blood cells. Erythrocytes contain red pigment hemoglobin, the principal function of which is the transport of oxygen. Erythrocytes are the most numerous cells in blood by volume ratio. From this point of view, blood is a suspension in which the cells of blood constitute nearly a half of its volume. It indicates a hematocrit value or the ratio of the volume of red blood cells to a given volume of blood once it is centrifuged to separate the cells of the blood from the plasma. The volume ratio equals 45.5% in an average adult person.

The methods of common hydrodynamics are no good for describing the flow of suspended matter. The viscosity of blood would increase by 500 times if the aforementioned cells were the solid particles.

The most amazing thing is that blood can flow against all odds. If its hematocrit value stays as mentioned above, the viscosity of blood exceeds that of water by three times only. It will be 50 times higher than the viscosity of water if the hematocrite value soars to 85%.

Red blood bodies are normally shaped like biconcave lenses i.e. they resemble disks measuring 8 microns in diameter. Disks are curved inward on either side. The maximum thickness of it is 4 microns, while its minimum thickness is 2 microns. A cytolplasm, the jelly-like substance of an erythrocyte, is located underneath its membrane. A mature erythrocyte has no nucleus.

The structure of a cell enables it to change its shape while moving along the narrow capillaries, which are narrower than the diameter of an erythrocyte. In terms of shape, erythrocytes become more streamlined as they move through the capillaries. They move in an orderly manner, one by one.

The lifespan of an erythrocyte is only 4 months. Dead erythrocytes are removed from the circulation via the liver and spleen. An ageing erythrocyte is incapable of being flexible with regard to its volume, and therefore the number of ageing cells that get into the narrow channels is on the decrease. Worn-out cells are washed away by the bloodstream into the vicinity of the spleen, “a cemetery of the erythrocytes.”

The membrane of an erythrocyte is very durable and elastic at the same time. It is very variable in terms of shape. Thus, a cell becomes quasi-liquid, and does not put up a lot or resistance as it moves along.

Blood flowing through the center of a vessel moves at top speed. On the contrary, the bloodstream grinds to a halt while moving near the walls of a vessel. Therefore, the parts of an erythrocyte’s disk are subject to the impact of different layers of blood moving at a different speed. Yet the erythrocyte does not roll like a wheel, it rather crawls like a caterpillar track.

A liquid membrane does not produce any hydrodynamic resistance. As a result, the viscosity of blood is a lot lower than it could have been if an erythrocyte had been either solid or elastic.

The polarity of an electrical charge will quickly change to the opposite one once a blood vessel is damaged. The negatively charged blood particles will immediately settle down onto the damaged area and effectively plug the hole. Moreover, the difference in potentials will lead to coagulation of the colloidal particles, which will speed up the healing.