The USA celebrated a rather original holiday titled No Pants Day a month ago, in the beginning of May. The holiday is not only a day of fun, it gives a good reason to lead a healthy lifestyle, when people bid farewell to a very bad habit of theirs (at least for one day) – wearing pants. 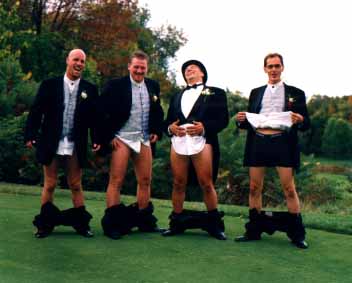 Trousers and a strong belt have been considered the symbol of masculinity for ages. This garment has been mainly connected with the military science, where accuracy is highly important: loose and baggy clothes could cause discomfort for soldiers - the price could be too high. Many years have passed since the end of WWII, a lot of states changed their military regimes to democracy, generations of people grew up in peace, but tight belts are still common, fashionable and stylish.

It might seem to be a paradox, but it is democracy that maintains the fashion trend for tight belts. On the one hand, trousers have become a garment of women's wardrobe because of feminism. On the other hand, the massive production and industrialization in the 1960s gave rise to so-called corporate styles, when people started wearing similar uniforms. Uniform became an association of the advanced fields of human activities during the peak of the scientific progress – aviation and space exploration. Science fiction movie characters of the 20th century, such as StarTrek, always wore identical uniforms, for example.

It goes without saying that fashion designers could not leave such a remarkable trend in clothes out of their attention. Gianni Versace believed that modern people want to wear uniforms because they had no time to choose. Having added their own ideas to the uniform style, designers created tight clothes, which removed sexual differences and underlined the beauty of a human body. As a result, people were wearing tight close until the end of the 20th century. The trend is still strong in the 21st century too, though.

Doctors say, however, that tight clothes limit the mobility of hip joints. Furthermore, if a person prefers jeans, he or she might suffer from the stretching of joint capsules. Tight pants make a person develop a peculiar step, which negatively affects the spine. Wearing fashionable low waist jeans might result in compression of nerves, which leads to a burning and tingling feeling in the legs. A lot of vital internal organs are placed in the abdominal cavity. Blood vessels in the area below the umbilicus perform the lymphatic drainage of abdominal organs. If the belt is too tight on the waist, it slows down the lymph flow from the pelvis. Such an obstacle complicates the work of the immune system too. To crown it all, internal abdominal organs suffer from insufficient blood supply.

All these drawbacks can be minimized with active physical exercises, movements and breathing. A modern person, who presumably leads the so-called office life, is not active at all. Consequently, the “sitting lifestyle in pants” increases the risk of a whole bouquet of diseases, from prostatitis to cancer.

Increased temperature is another harmful peculiarity that tight clothes cause to people. Doctors often describe it as heat castration. Medics do not recommend men to wear tight pants and underwear: they overheat testicles, which undermines the sperm-forming process and reduces the quality of semen. Tight leg-wear restricts the access of air to women's genitals, producing increased humidity and heat and increases the risk of infectious diseases.

It goes without saying that people, especially men, will not give up wearing trousers and belts, despite the above-mentioned medical facts. Scotchmen in kilts, Javanese men in sarongs, Amazon Indians in reed skirts – these are the only examples, in which men lead healthy lives with no pants on. However, the Statistics Department of the European Union, Eurostat, did not let Scotland register kilts as the basic garment of men's clothes. The decision provoked an international scandal.