Russian doctors say that Russia is currently standing on the verge of new outburst of sexually transmitted diseases. It seems to be a paradox, but the venereal epidemic might occur because of the safe sex propaganda. 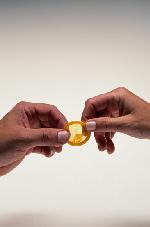 It turns out that people decide to brush all apprehension aside and lead sexually irresponsible lives thinking that a condom will save them from any diseases anyway. As a result, the number of patients in Russian venerologic hospitals has increased. Doctors say that a condom does not guarantee the absolute protection from sexually transmitted diseases. For example, a condom can not save a person from warts, herpes and dermatophyte.

”People started thinking after the “Safe Sex” program that they would be able to protect themselves against any disease. They let themselves go on this assumption,” Ludmila Stebenkova of Moscow's parliamentary committee for healthcare says.

The number of people that suffer from papillomas has increased by 50 percent over several recent years. A lot of people think that detestable genital warts are not dangerous at all, although this ailment might eventually result in cancer. The number of herpes and fungal infection patients has been growing lately as well.

It is worth mentioning that the safe sex propaganda does not improve the situation with sexually transmitted diseases. Medics say that a lot of people still do not know most primitive rules when they use condoms. Moscow law-makers believe that it is useless to teach people how to use the latex protection – it would be easier not to make love at all.

”One should propagandize total abstinence before marriage. The safe sex propaganda in the USA, for example, has resulted in the dissolution of morals. Sexually transmitted diseases started progressing there. That is why the US government assigns huge money to promote the value of innocence and virginity. It is coming into fashion,” Ludmila Stebenkova said.

It is not ruled out that America will eventually succeed in setting the new trend in sex. However, Russian and American moralities cannot be compared. What works for the States might become a disaster in Russia and vice versa.

Teenagers will most likely continue forgetting all precautions in bed. It goes without saying that any safe sex propaganda loses its value entirely, when hormones drive a young organism. Unsafe sex increases the risk of venereal infections and results in the wild growth of unwanted teenage pregnancy. It is noteworthy that Russia is ranked third after Ukraine and Moldova on the number of teenage abortions.

Russian law-makers have not been impressed with the above-mentioned argumentation of the traditional safe sex propaganda. Numerous posters and stickers of the new campaign will appear in the Moscow metro in the beginning of summer. “Safe sex does not exist” – this is the only detail that Moscow deputies plan to add in the new propaganda.