A main ingredient in beer may help prevent prostate cancer and enlargement, according to a new study. But researchers say don't rush out to stock the refrigerator because the ingredient is present in such small amounts that a person would have to drink more than 17 beers to benefit. 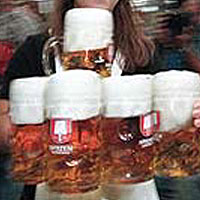 Oregon State University researchers say the compound xanthohumol, found in hops, inhibits a specific protein in the cells along the surface of the prostate gland.

The protein acts like a signal switch that turns on a variety of animal and human cancers, including prostate cancer.

Xanthohumol was first discovered in hops in 1913, but its health effects were not known until about 10 years ago, when it was first studied by Fred Stevens, assistant professor of medicinal chemistry at OSU's College of Pharmacy.

Last fall, Stevens published an update on xanthohumol in the journal Phytochemistry that drew international attention.

Stevens says it possible for drug companies to develop pills containing concentrated doses of the flavonoid found in the hops used to brew beer.

He also says researchers could work to increase the xanthohumol content of hops.

There are already a number of food supplements on the market containing hops, and scientists in Germany have developed a beer that contains 10 times the amount of xanthohumol as traditional brews. The drink is being marketed as a healthy beer, but research is still under way to determine if it has any effect against cancer, the AP reports.

The food is labeled “functional food.”

The reason for recent functional food studies, Ho said, is that Americans are known for not eating their fruits and vegetables. The American lifestyle is spreading internationally with the growth of McDonald’s and Kentucky Fried Chicken chains in foreign countries. People in urban cities worldwide are gaining weight, barometer.orst.edu reports.