Pravda.Ru has already reported about 17-year-old Russian girl, Natasha Demkina, from the city of Saransk. The girl has become known for her astounding X-ray ability to see people through and diagnose diseases. Scientist became interested in the Russian girl's phenomenon: Natasha Demkina was invited to come to London and New York for scientific experiments. British researchers unanimously acknowledged Natasha's remarkable gift, whereas American scientists hesitated to come to such a conclusion. They did not like that fact that the girl successfully diagnosed diseases with only four patients out of seven. Natasha Demkina has recently passed a similar test in Tokyo, where Japanese scientists confirmed the gift of the Russian X-ray girl. 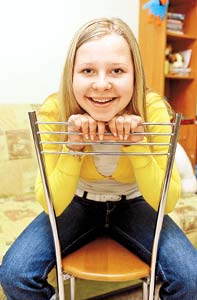 Natasha is currently a student of the Semashko's Moscow Medical University. Yoshio Machi, a professor of the Tokyo University, invited the girl to come to Tokyo to have her abilities tested again. Professor Machi is known in the world as a scientist, who studies unusual human abilities.

Having the experience of previous trials in London and New York, Natasha Demkina set forth her own conditions to Japanese scientists. She particularly said that each of the tested patients would have to bring latest medical certificates of their state of health. In addition, the girl demanded the diagnosis should be restricted to only one certain body part – the head, the torso, or extremities.

”It takes me too much time to explain and specify everything that I can see. Sometimes I can see diseases at their early stages, when neither patients nor their doctors have any slightest suspicions about them. That is why we had problems with American scientists,” Natasha says.

During the test in Japan, Natasha was able to see that one of the patients had a prosthetic knee. Another patient had asymmetrically placed internal organs. Natasha easily diagnosed early stages of pregnancy and even a pathology of the fetus with a female patient. She diagnosed a rare undulating spinal curvature with a male patient. When Japanese doctors compared Natasha's drawing of the curvature with the X-ray photograph, they could see that the photo and the drawing were absolutely identical. When Natasha was finished with her seven patients, Japanese doctors could not help bursting into applause. However, it was only the first stage of the trial.

Professor Machi could not ignore the remarks of his American colleagues, though. US scientists concluded as a result of their research that the Russian girl was not seeing but guessing people's diseases with the help of certain external factors. The Japanese professor decided to conduct another testing session for the girl, this time in a vet clinic.

Natasha Demkina was offered to diagnose the disease of an old rottweiler. The girl was afraid to approach the unmuzzled animal, but the doctor told her that she had to look at the dog's paws. Five minutes later the girl pointed at the animal's right back leg, in which she saw a prosthetic device.

The Japanese scientists did not believe the girl, when she told them that she could also see diseases on people's photographs. When she was presented a small, passport-sized photo of a person, she quickly diagnosed liver cancer with the person on the picture.

Russian scientists evinced their interest in the phenomenon of the X-ray girl as well. Demkina is going to be tested in Moscow in the near future, when she passes her spring exams at the University.