Being obese and being overweight are not exactly the same thing. An obese person has a large amount of extra body fat, not just a few extra pounds. People who are obese are very overweight and at risk for serious health problems. Obesity should be fought at the very beginning, but it often happens that obese people are trying to invent different excuses not to work on themselves. Today scientists have come to help such people. 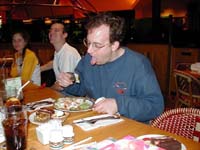 Researchers at the Medical Research Council have unearthed the perfect excuse for overeating: it's in the brain. The Scientists have come up with the first neurobiological proof as to why some people seem unable to resist food.

The research, published today in the Journal of Neuroscience, not only provides evidence that some people are particularly susceptible to images of food but helps to explain the power of food advertising.

Researchers already knew that a certain personality trait which reflects the drive to pursue reward or pleasurable experiences, including food, is exhibited at various levels depending on the person. This difference is called higher or lower reward sensitivity.

Previous research has shown that people with high reward sensitivity have stronger food cravings and are more likely to be overweight. But until now the biological basis for this had not been known.

The study identifies how this relationship operates in the brain. It shows that individuals with higher reward sensitivity show increased activity in five key areas of the brain implicated in motivation or reward, and that this increase happens when they simply look at pictures of appetizing food. The scientists, led by John Beaver, used brain scanning technology known as functional magnetic resonance imaging to analyze the brain activity of 12 men and women as they looked at highly appetizing food, such as chocolate cake, as well as bland foods (broccoli), and disgusting food (rotten meat).

After testing, the participants completed a questionnaire that assessed their drive to pursue goals and so determined their level of reward sensitivity.

The study found that, shown pictures of the appetizing food, individuals with higher reward sensitivity had up to twice the level of activity in the five areas of the brain implicated with reward - known as the neural network - compared with those with lower reward sensitivity.

Dr Beaver, the study's lead author, added: "Previous studies in this area have assumed that brain activation patterns are similar in all healthy individuals. But the new findings demonstrate that even in healthy individuals some people's brain reward centers are more sensitive to appetizing food cues. This helps explain why some individuals are more vulnerable to developing certain disorders like binge eating.

"This is particularly pertinent in understanding the rapidly increasing prevalence of obesity, as people are constantly bombarded with images of appetizing food items in order to promote food intake through television adverts, vending machines, or product packaging."

The researchers also believe the findings could have implications for the study of other forms of addictive behavior, such as alcoholism and drug abuse, as well as compulsive disorders.