Ginger is a new weapon to fight ovarian cancer

Common ginger may be the next weapon in the battle against ovarian cancer, scientists have suggested. Laboratory studies have shown that powdered root ginger could be as effective as chemotherapy for treating ovarian cancer. 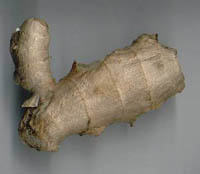 Ginger is a new weapon to fight ovarian cancer

The ovaries are a woman's reproductive organs which produce steroid hormones as well as eggs, called ova. Ovarian cancer usually occurs after menopause. In fact, 50% of ovarian tumors occur in women aged 40 to 60 and 40% over age 60. Like other cancers, ovarian cancer is a disease of body cells. Cancerous tumors in the ovaries can not only invade and destroy surrounding normal tissues, their cells can metastasize, which means they break away and spread to other parts of the body. Generally, it will involve the abdominal cavity. Women who have never had children are twice as likely to develop this cancer as those who have given birth. There are usually no obvious symptoms of ovarian cancer until late in its development. If there is a symptom of ovarian cancer present, it will most likely be an enlarged abdomen caused by the accumulation of fluid, according to cancer.med.umich.edu

When research-grade ginger - which is free of additives - was applied to ovarian cancer cells in Petri dishes it proved to be as effective as platinum-based chemotherapies for stopping cell growth.

The US scientists behind the research are particularly excited because ginger seems to offer a two-pronged attack on cancer cells: it makes them commit suicide, known as apoptosis, and self-digest, known as autophagy. It offers the hope that when one form of attack starts to fail the other will kick in.

"Most ovarian cancer patients develop recurrent disease that eventually becomes resistant to standard chemotherapy - which is associated with resistance to apoptosis," said Rebecca Liu, assistant professor of obstetrics and gynaecology at the University of Michigan medical school, where the research was carried out. "If ginger can cause autophagic cell death in addition to apoptosis, it may circumvent resistance to conventional chemotherapy." The scientists stressed these were preliminary findings.

Ginger is known to ease nausea, and it is being investigated for use to lessen the side-effects of chemotherapy and prevent bowel cancer. But the research into its use to treat ovarian cancer is at an early stage, the Guardian reports.

Henry Scowcroft of Cancer Research UK has called for a cautionary approach to the findings.

“This doesn’t mean that people should dash down to the supermarket and stockpile ginger,- he said. - We still don’t know whether ginger, in any form, can prevent or treat cancers in animals or people. And there is always the possibility that eating lots of ginger or taking ginger supplements might interfere with chemotherapy or be harmful to health.”

Stowcroft admitted after previous research a drug made from a chemical found in ginger could be feasible but said much more work was needed before firm conclusions could be drawn, freshinfo.com says.

The researchers do warn however that the results are very preliminary and they plan to test whether they can obtain similar results in animal studies.

The researchers say the appeal of ginger was that it would have virtually no side-effects and would be easy to administer as a capsule.

Cancer experts say that previous research has also shown that ginger extract can stop cancer cells growing so it was quite possible that ginger could form the basis of a new drug in the future, but more research was needed to corroborate the findings, according to news-medical.net.

Actually, ginger root is not really a root at all, but a rhizome or underground stem. It’s harvested nearly year-round. Ginger’s earlier harvests--about five months after planting--are used to process products like ginger syrup and candied ginger. Later harvests are sold as fresh ginger. The longer the ginger remains underground before harvest, the hotter and spicier it gets--and the better it is for use in homeopathic remedies.

Other benefits of ginger

For thousands of years Asian civilizations have used ginger medicinally as well as in cooking. It’s said to aid in the remedies of ailments from motion sickness to athletes foot. Its anti-inflammatory properties can lessen the pain of rheumatoid arthritis and many women claim ginger tea helps rid them of menstrual cramps.

For motion sickness, upset stomachs, colds or headaches, steep about a teaspoon of chopped fresh ginger in a cup of boiling water to make a tea. Sip this tea before taking a trip to avoid motion sickness or during or after the journey to calm a queasy stomach.

As a mood enhancer, ginger’s cineole content may help contribute to stress relief. So sipping a cold glass of ginger ale after a hard day at the office might be just what the doctor ordered. Just make sure the ginger ale you drink is made with real ginger. Some of today’s sodas are artificially flavored and will do nothing for you like ginger can.