Up to 50 percent of global population susceptible to allergy attacks

Do not jump to conclusions if your skin itches and you have difficulty in breathing as you lie on your bed in the morning with your spouse looking on. Do not blame yourself for tying the knot too fast. Probably the moral character of your husband has nothing to do with the situation. Maybe it is just his new shaving foam that causes an attack of allergy in your body. 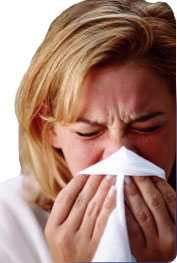 Up to 50 percent of global population susceptible to allergy attacks

Does an allergic attack indicate a grave disorder? Allergy is not by any means a chronic disorder. It occurs when the body becomes hypersensitive to particular antigens (allergens). Can you forget about allergy if there is no allergen in your environment? Unfortunately, you can not.

Allergy has been around from time immemorial (it is even mentioned in the Old Testament). However, it would be wrong to confuse allergies with maladies characterized by similar symptoms. Quite a few people begin to suffer from a bout of coughing and sneezing in June as poplars burst into blossom. Those people are pretty certain that they are allergic to pollen. But a poplar can not cause allergy since the tree in bloom does not contain any pollen that is often responsible for a wide range of allergies.

Emotional factors may also cause the so-called fake allergy. For example, a person can not stand chocolate and, finally, admits his loathing to a doctor. The picture looks crystal-clear after a quick delving into the patient’s past is done. Some childhood memories are to blame for his aversion to the sweet brown stuff melting in the mouth. The person’s mother would punish him every time she found out he had eaten all the candies in the house.

But we should not disregard allergy for it is a serious problem for humankind. Different allergies afflict different tissues and may result in severe complications, primarily hypertension and myocardial infarction.

Depending on local conditions, from 20 percent to 50 percent of the global population are susceptible to allergy. And the number keeps growing year in and year out. One out of three Russians is prone to allergy. In Russia’s southern regions rife with the plant ambrosia virtually every local resident suffers from allergy when the plant begins to bloom.

Miners may develop allergy by inhaling coal dust. Maids may become allergic to dust produced during a repetitive carpet beating. But dust is merely one of many allergens which are extremely diverse. Virtually any substance or chemical may bring about fever, wheezing, rash and dermatitis. Every person has an allergen chosen by his immune system. It is very distressing if allergy is caused by food allergens. A person can do without honey or albumen. It is a lot harder to stay away from bread, meat or fruit. Fruit is rich in substances that may be a plague for some people. They are likely to develop an awful rash soon after eating a couple of strawberries. Food additives are even worse for an allergic person. They may trigger a severe reaction including bronchospasm. In this case it is strongly recommended that you call an emergency squad.

Can allergy be fatal? Yes, it can in case of the so-called medicinal allergy i.e. a person’s immune system rejects a certain drug. An allergic person may be at risk mostly due to intake of penicillin, sulfonamides, aspirin, and vitamin of the B complex. Doctors are aware of the possibility of an accident but tragic mistakes are made at times anyway.