What does man need a nose for? Animals do not have a special organ of smell shaped like a nose. They are only equipped with nostrils on the mouth or beak. 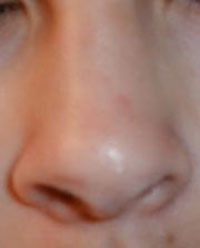 The above question may bewilder some people. Besides, it definitely deserves proper consideration. The nose is usually referred to as an organ of olfaction which also acts as an air passage that warms, moistens, and filters the air on its way to the lungs though animals’ nostrils do the same job. Animals have a keener sense of smell but they lack a nose. Neither man’s ancestors nor anthropoid primates including apes have a nose.

The second signal system that is characteristic of humans only plays an enormous role in the functioning of the brain.

Animals can only feel stimuli by means of the first signal system i.e. though the physical pain. A word can have a strong negative impact on the human brain, which uses an induction principle for buffering the impact of a shock. The brain switches on a protective system in case of a strong pain, fright, or a bad breakdown. Animals will run wild and rush about the place, they will scream and shout. Man will behave in a similar manner. He will move about the apartment frantically, he will scream, he will clench his teeth or bite his lip or do something else to inflict pain on himself. The actions will lessen the impact on an affected area. That is why pain seems easier to bear in the daytime than after dark. The day is normally richer in outside stimuli than the night.

If a stimulus exceeds the endurance limit, an “over-the-limit” inhibition occurs and renders a cell insensitive to any outside stimulus. It could be a faint, a partial or complete paralysis. A hysterical paralysis can last for years, at times it can be a lifetime condition.

A person with a low limit of the nervous system will pass out when subjected to more or less strong stimuli. A person will come around quickly once the receptors of his nasal cavity (internal nose) are sufficiently stimulated e.g. by sniffing a bit of liquid ammonia.

People with a reduced activity of cortical neurons are driven to tears quite easily. People tend to shed more tears as they grow old and the neurons grow weaker. People become more emotionally sensitive as time goes by.

As a rule, the neurons responsible for the functioning of a respiratory center work round the clock. They take a break from time to time, though. Their work is done by other neurons when push comes to shove. However, the body may run put of standby neurons if the pressure is too high on the regular neurons. Consequently, a respiratory center may decrease its activity or stop functioning altogether. That is why breathing grinds to a halt when a person, especially the one with a lack of training, goes through an excessive strain. The point is that the vocal cords, which normally lie along the walls of a larynx, slacken under the strain and dramatically cause to breathing.