People have been aware of music’s healing properties since the times of Pythagoras and Aristotle. Russians have long believed in medicinal effects of the sound of church bells. The branch of science studying interaction of music and other sounds with living organisms (including a human body) brings forth most interesting discoveries almost every day. 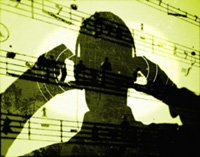 A Los Angeles scientist believes that living cells can make distinct sounds, which might someday help doctors “hear” diseases. Jim Gimzewski, a 52-year-old UCLA chemist, calls the study of cell sounds sonocytology. The scientist became interested in the sound of cells in 2001 after a medical researcher told him that when living heart cells were placed in a Petri dish with appropriate nutrients, the cells would continue to pulsate. Gimzewski wished to found out whether such tiny vibrations would produce a detectible sound. He conducted a series of experiments using complex equipment. Those experiments showed that the cells could really make a noise though it was detectible only by an especially sensitive instrument. Gimzewski and his assistant used some yeast cells for conducting their research of cellular noise. They found out that the pitch of the sound wave would be higher if cells are sprinkled with alcohol. The dead cells would give off a low, rumbling sound. The researchers also found that yeast cells with genetic mutations produce a slightly different sound than normal yeast cells do. They hope that the technique might eventually be applied to diagnosing diseases such as cancer, which is thought to originate with changes in the genetic makeup of cells.

It is already clear that the future of medicine hinges specifically on research of cellular activities. The world of sounds takes part in those processes in a most active manner.

“Scientists have long noticed that music could impact the blood circulation e.g. change its rate,” says Sergei Shushardzhan, one of the greatest specialists in music therapy. “However, it was not until recently that scientists have realized that music therapy is an interdisciplinary branch of science that came into being at the junction of many areas. There is a purely physical side of the phenomenon since music is the sound, rhythm, frequency etc. At the same time, there is a medical aspect of it – a reaction of the body to music at the psychological and cellular level. Our team, for example, have conducted a series of extremely interesting experiments involving cancer cells and microbe cells. The cell cultures were placed in between the loudspeakers and subjected to the sounds of music in four different styles: classical, easy listening/symphonic, rock, medieval hymns. The latter was found to have the strongest impact. The interaction processes are very complex. By and large, one style of music is able to boost the growth of cells while another can suppress it. Probably the method will help researchers find a key to control cellular processes and discover a way to understand the development mechanism of malignancies,” says Shushardzhan.

Studying the effects of music rhythm on the human body e.g. the brain functions is another exciting topic of research. Scanning the brain while patients listened to different kinds of music brought out interesting data. For example, blood circulation was reported to have increased in both hemispheres of the brain as patients were listening to music with a very aggressive rhythm structure. The findings are just another piece of evidence that sounds of the outside world and the “sound” of our body are interrelated in a most complex way. Still, there are more questions than answers.