Washington, (Prensa Latina) An article in the American newspaper The Washington Post recognized the importance of Cuban medical aid to African countries suffering the hardships of the Ebola virus, after 165 professionals from the island reached Freetown, Sierra Leone.

Under the title "In the medical response to Ebola, Cuba is batting well above its weight," the influential newspaper, with a circulation of almost half a million daily copies, addressed the Cuban health cooperation in West Africa, at the request of the World Organization Health Organization (WHO).

A text written by journalist Adam Taylor and published in this newspaper, enhances the response of the small Caribbean country of only 11 million people, which has become a key provider of its medical experience, at a time when the international community is accused of "dragging its feet " in facing the consequences of the virus.

The Washington Post points out that Cuba, despite being a poor country, with a GDP that is one-sixth of that displayed by the UK, gave a quick and forceful response, above the sanitary offerings of many of the richest countries in the world .

Furthermore it assessed the universal Cuban health system, taking as reference the findings of the WHO, recognizing the extraordinary medical advances that lead Cuba to achieve indicators that are equal in developed countries and what has been achieved in the reduction of child mortality together with the high life expectancy.

The article also recognized systems of training of doctors and health technicians in Cuba, as well as the help the island has provided in the preparation of hundreds of thousands of doctors and experts from poor countries.

Taylor points out in his article that Cuba has provided for decades, medical solidarity needed help to many countries, and stressed the offer of hel given by Havana for the victims that were caused by Hurricane Katrina in the United States.

Finally, it emphasized the response given by Cuba to mitigate the damage caused by the Ebola virus, in which it plans to send 296 doctors and nurses to Liberia and Guinea, the two countries most affected by the crisis. 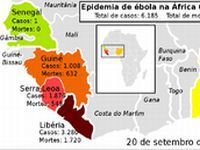