Puerto La Cruz, Venezuela. 60 new cases of a mystery virus were treated at the people's clinic of Nazaret which has been affecting the area around the oil refinery, adding to the hundreds of cases of what the local doctors have called "a strange virus". Other reports speak of ten deaths "in several cities" from a "mystery" virus. 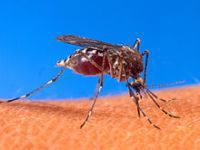 The symptoms of the mystery virus are a high fever, around 40 degrees Celsius, headache, pain in the limbs and bones, inflamed glands and general malaise. The local health authorities in Puerto La Cruz have reported hundreds of cases on the virus this month and state that the majority of them live in the area surrounding the oil refinery, residents in the areas of Las Delicias, Valle Verde, Chuparín and other neighbourhoods, by the refinery. Has nobody heard of the Chikungunya outbreak in the Caribbean area or Dengue Fever which is endemic in Venezuela?

Fifty different tests have been applied to the patients of this disease to find out what it was, according to Dr. Marisela Azócar, epidemiolgist. The samples have been sent to the State Laboratory at the Institute of Hygiene to determine what the virus is. The results should be known next week. I will say what the result is here today: Chikungunya, a painful but very rarely deadly disease or possibly a variant of Dengue Fever which can cause hemorrhagic symptoms in extreme cases.

The Venezuelan Government has accused the Opposition and foreign media outlets of spreading panic through a puerile disinformation campaign.

Chikungunya means "writhing in pain" in the Makonde language (Tanzania and Mozambique). The symptoms are muscular pain, headache, nausea, vomiting, photophobia, fatigue and rash on the trunk and/or limbs. The disease causes a febrile state which lasts between two and five days, followed by terrible pains in the joints which can last for years or months in severe cases, although others last for weeks or even days. Complications are uncommon, and most survive but it can kill elderly or debilitated patients. There is no vaccination or cure. The incubation period is one to twelve days, mostly two or three.

The virus is carried by two species of mosquito, namely Aedes albopictus and Aedes aegypti, although the strain currently affecting the Americas is more probably spread by Aedes aegypti. If the virus mutates to the strain carried by Aedes albopictus, this would create a public health issue in the USA because this type of mosquito is widespread in that country and is also more aggressive.