Overconsumption of salt in Brazil increases risk of cataracts and damage to the retina. In Brazil cataracts, clouding of the lens, grows faster than the population over 60 years, although the disease is related to aging. According to the Penido Burnier Institute ophthalmologist, Leoncio Queiroz Neto, one of the factors contributing to this growth is the high consumption of salt. 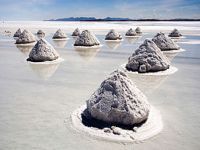 Just to give you an idea, a survey of IBGE (Brazilian Institute of Geography and Statistics) shows that Brazil continues to consume more salt than recommended, even after the recent reduction of sodium in some processed foods. The WHO (World Health Organization) recommends 5 grams of salt/day but in Brazil on average daily consumption is more than double, 12 grams.

According to Queiroz Neto, apart from the early appearance of cataracts, this habit can damage the retina.

Salt, he explains, regulates extracellular fluids and substances in our body. The abusive use may anticipate cataract formation because it hinders the maintenance of osmotic pressure between the crystalline cells and forms deposits that make it opaque.  The expert says that the Brazilians do not take seriously the influence of habits on eye health because the effects are not immediate.

Proof of this is a survey developed by the physician with a sample of a thousand people about solar protection. The study shows that less than 1% protect the eyes from the sun in outdoor activities, and only 40% used sunglasses with lenses that block ultraviolet radiation.

In addition to controlling salt intake he says to prevent cataracts it is important to use lenses with ultraviolet protection in outdoor activity, even during the winter and cloudy days. Dark lenses without protection are worse than not using anything he says, because they allow greater penetration of radiation into the eyes.

Hypertension can affect the retina

Queiroz Neto says that vascular retinal changes related to high salt intake are due to hypertension. Earlier, he comments, the change is imperceptible because it is characterized by arteriosclerosis, or degeneration and narrowing of the arteries in the back of the eye. The problem is the lack of control of hypertension. It can trigger disc edema, formation of new vessels and retinal cell death due to ischemic occlusion of the central retinal vein or bleeding that causes serious vision loss.

Treatment depends on the type of change. For those who have atherosclerosis is indicated avoid smoking another great enemy of vision. Queiroz Neto says that ischemic occlusion of the central retinal vein and the formation of new vessels may predispose to glaucoma. In this case it is essential that laser treatment is performed to eliminate neovascularization.

The sooner the treatment is done, the better the result. In cases of bleeding the treatment is associated with the use of laser therapy and anti-angiogenic therapy but the results are not always satisfactory. Therefore, the recommendation to those who have hypertension is to consult an ophthalmologist annually and perform physical activities that help keep the pressure under control.

Queiroz Neto says that 70% of the salt we consume comes from processed foods and the reduction of sodium by the industry is  gradually being implemented. So it is essential to read the packaging since the same type of product may have great differences in the amount of sodium. Other tips from the doctor to reduce consumption are:

Ø Replace common salt with light salt which has 50% sodium

Ø Remove the salt shaker from the table

Ø Increase the consumption of fruits and fresh vegetables.