Weedkiller with your fries, Sir? 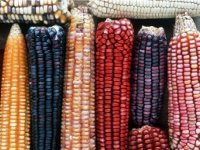 "Historians may look back and write about how willing we are to sacrifice our children and jeopardize future generations with a massive experiment that is based on false promises and flawed science just to benefit the bottom line of a commercial enterprise." So said Don Huber in referring to the use of glyphosate and genetically modified crops. Huber was speaking at Organic Connections conference in Regina, Canada, late 2012.

Huber is an emeritus professor in plant pathology at Purdue University in the US and has worked with the Department of Homeland Security to reduce the impact of plant disease outbreaks. His words are well worth bearing in mind given that a new study commissioned by Friends of the Earth Europe (FoE) and GM Freeze has found that people in 18 countries across Europe have been found to have traces of glyphosate in their urine.

Friends of the Earth Europe commissioned laboratory tests on urine samples from volunteers in 18 countries across Europe and found that on average 44 percent of samples contained glyphosate. The proportion of positive samples varied between countries, with Malta, Germany, the UK and Poland having the most positive tests, and lower levels detected in Macedonia and Switzerland. All the volunteers who provided samples live in cities, and none had handled or used glyphosate products in the run-up to the tests.

The Influence of the Biotech Sector on Safety and Regulation

Although 'weedkiller in urine' sounds alarming, Tom Sanders, head of the nutritional sciences research division at King's College London, says the levels found are unlikely to be of any significance to health because they are 300 times lower than the level which might cause concern. Alison Haughton, head of the Pollination Ecology Group at Rothamsted Research, said that if FoE and GM Freeze want their work to have scientific credibility and provide a genuine contribution to the debate on pesticide residues, they should submit their work for publication in a peer-reviewed journal.

Valid points, you might think. But FoE believes that there is sufficient evidence to suggest environmental and health impacts from glyphosate warrant concern. It wants to know how the glyphosate found in human urine samples has entered the body, what the impacts of persistent exposure to low levels of glyphosate might be and what happens to the glyphosate that remains in the body. New research published in the journal Entropy sheds disturbing light on such concerns (discussed later in this article).

In 2011, Earth Open Source said that official approval of glyphosate had been rash, problematic and deeply flawed. A comprehensive review of existing data released in June 2011 by Earth Open Source suggested that industry regulators in Europe had known for years that glyphosate causes birth defects in the embryos of laboratory animals. Questions were raised about the role of the powerful agro-industry in rigging data pertaining to product safety and its undue influence on regulatory bodies (2).

In the same vein, FoE says there is currently very little testing for glyphosate by public authorities, despite its widespread use, and authorities in Europe do not test for glyphosate in humans and tests on food are infrequent. Glyphosate was approved for EU-wide use in 2002, but FoE argues that the European regulatory agencies did not carry out their own safety testing, relying instead on data provided by the manufacturers.

Of course there are certain scientists (usually with links to the agro-industry) who always seem to be strident in calling for peer-reviewed evidence when people are critical of the biotech sector, but then rubbish it and smear or intimidate the scientists involved when that occurs, as has been the case with Dr Arsad Pusztai in the UK or Professor Seralini in France. It is therefore quite revealing that most of the data pertaining to glyphosate safety came from industry studies, not from peer-reviewed science, and the original data are not available for independent scrutiny.

With references to a raft of peer-reviewed studies, FoE also brings attention to the often disturbing health and environmental dangers and impacts of glyphosate-based herbicides throughout the world. The FoE study also highlights concerns around the increasing levels of exposure to glyphosate-based weed killers, particularly as the use of glyphosate is predicted to rise further if more genetically modified (GM) crops are grown. It is after all good for business. And the biggest producer of glyphosate is Monsanto, which sells it under the brand name 'Roundup'.

Despite its widespread use, there is currently little monitoring of glyphosate in food, water or the wider environment. The FoE commissioned study is the first time monitoring has been carried out across Europe for the presence of the weed killer in human bodies. FoE Europe's spokesperson Adrian Bebb argues that there is a serious lack of action by public authorities and indicates that this weed killer is being widely overused.

This certainly needs to be addressed not least because the prediction concerning increasing exposure to glyphosate is not without substance. The introduction of Roundup Ready crops has already resulted in an increase of glyphosate use. Using official US government data, Dr Charles Benbrook, research professor at the Center for Sustaining Agriculture and Natural Resources at Washington State University, states that since 1996 the glysophate rate of application per crop year has tripled on cotton farms, doubled in the case of soybeans and risen 39 percent on corn. The average annual increase in the pounds of glyphosate applied to cotton, soybeans, and corn has been 18.2 percent, 9.8 percent, and 4.3 percent, respectively, since herbicide tolerant crops were introduced.

Glyphosate is used on many genetically modified crops. 14 new GM crops designed to be cultivated with glyphosate are currently waiting for approval to be grown in Europe. Approval of these crops would inevitably lead to a further increase of glysphosate spraying. In the US, biotech crops, including corn, soybeans, canola and sugarbeets, are planted on millions of acres annually.

Evidence suggests that Roundup could be linked to a range of health problems and diseases, including Parkinson's, infertility and cancers, according to a new peer-reviewed report, published recently in the scientific journal Entropy. The study also concluded that residues of glyphosate have been found in food.

These residues enhance the damaging effects of other food-borne chemical residues and toxins in the environment to disrupt normal body functions and induce disease, according to the report, authored by Stephanie Seneff, a research scientist at the Massachusetts Institute of Technology, and Anthony Samsel, a science consultant. The study says that negative impact on the body is insidious and manifests slowly over time as inflammation damages cellular systems throughout the body.

In 2010, the provincial government of Chaco province in Argentina issued a report on health statistics from the town La Leonesa. The report showed that from 2000 to 2009, following the expansion of genetically-modified soy and rice crops in the region (and the use of glyphosate), the childhood cancer rate tripled in La Leonesa and the rate of birth defects increased nearly fourfold over the entire province.

Professor Huber also notes the health risks associated with the (increasing) use of glyphosate. He says a number of plant pathogens are emerging, which when consumed could impact human health. Based on research that he alludes to (he refuses to make his research public or identify his fellow researchers, who he claims could suffer substantial professional backlash from academic employers who received research funding from the biotechnology industry), Huber notes that the use of glyphosate changes the soil ecology, killing many bacteria, while giving other bacteria a competitive advantage. This makes plants highly susceptible to soil borne diseases. At the same time, glyphosate has a negative effect on a number of beneficial soil organisms.

Huber's concerns about the impact of long term use of glyphosate on soil sterility are similar to concerns expressed by Elaine Ingham, a soil ecologist with the Rodale Institute, and also research carried out in by Navdanya in India.

As for GM crops, Huber says they have lower water use efficiency, tend to be nutrient deficient, have increased bud and fruit abortion and are predisposed to infectious diseases and insect damage. He suggests that Roundup Ready crops, treated with glyphosate, have higher levels of mycotoxins and lower nutrient levels than conventional crops.

"... you could say that what you're doing with glyphosate is you're giving the plant a bad case of AIDS. You've shut down the immune system or the defense system." Professor Ron Huber

He concludes that, when consumed, the GM crops were more likely to cause disease, infertility, birth defects, cancer and allergic reactions than conventional crops.

Huber claims that consumption of food or feed that was genetically modified could bring the altered genes in contact with the microbes in the guts of the livestock or people who eat them. He feels this increases diseases, such as celiac disease, allergies, asthma, chronic fatigue syndrome, diabetes, gluten intolerance, irritable bowel disease, miscarriage, obesity and sudden infant death syndrome.

While none of these findings conclusively prove that plant (or animal) diseases are caused by the glyphosate, Huber feels safety evaluations have been inadequate, suggesting that previous (GM sector) research was substandard and extremely misleading in its interpretation of results - or worse.

With some hugely powerful players involved here, many of whom have successfully infiltrated important government and official bodies, much of the science and the ensuing debate surrounding glyphosate is being manipulated and hijacked by vested interests for commercial gain.

"... publishing in this area can also be difficult. I know from the International Symposium on Glyphosate that they had to find a journal publisher outside this country (the US) to publish the research data and symposium proceedings. It's pretty hard to get it published in the States. There are also some hazards to publishing if you're a young researcher doing research that runs counter to the current popular concepts. A lot of research on safety of genetic engineering is done outside of this country because it's difficult to gain access to the materials, or the statements you have to sign to have access to those materials stating that you won't publish without permission of the supplier. I think the 26 entomologists who sent their letter to EPA in 2009 stated it aptly when they said that objective data wasn't available to the EPA because the materials haven't been available to them or that they're denied the opportunity to publish their data." Professor Ron Huber