As predicted in this column several years ago, tropical diseases have started to appear in Europe. Among these is the dreaded Dengue Fever, which can develop into an Ebola-like haemorrhagic form, causing the patient to bleed from the nose, mouth, ears and eyes. To date there are 34 cases reported on the Isle of Madeira, Portugal. 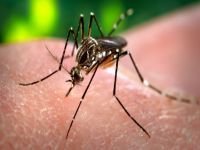 The cases were confirmed by the President of the Regional Health Service of Madeira, Miguel Ferreira, who stated that 34 positives had been provided by laboratory tests at the Hospital Dr. Nélio Mendonça. The expert stated that only five people remain in hospital and none of the cases present severe symptoms.

Dengue Fever is transmitted by the mosquito Aedes aegypti, which became endemic on the Isle in 2005 and this is the first outbreak of the disease despite the fact that the regional health authorities have done all they can to combat the infestation. The focus of the outbreak is in the city of Funchal, more specifically the local council of Santa Luzia.

Severe cases of Dengue Fever can be fatal, particularly the haemorrhagic form. The symptoms occur between three and fourteen days after infection and these are: fever, headache, muscle pains, general lethargy, pains in the joints, nausea, vomiting and abdominal pain. Four viruses can cause Dengue, all carried by the Aedes aegypti mosquito. There is no specific treatment except for hydration and aspirin. Anti-inflammatory drugs (Ibuprofen) are not recommended.

The haemorrhagic form of Dengue Fever is rare and usually affects children.