Research was done in the short term that could not identify the optimal amount of chocolate to be eaten...

Daily consumption of dark chocolate can help lower blood pressure slightly, a second analysis of 20 studies indicated. The research was conducted by the Cochrane group - an international collaboration of thousands of experts who review previous studies.

The reason was the cocoa, the main ingredient of chocolate, which relaxes blood vessels.

The theory is that cocoa contains flavonoids, that cause the human body to produce a chemical substance called nitric oxide, which "relaxes" vessels, facilitating the passage of blood and, therefore, lowering blood pressure.

Previous studies combined with the Cochrane analysis presented mixed results. The daily amount of cocoa consumed by each participant varied from 3g to 105g, but all showed a slight decrease in pressure. Systolic blood pressure of 120 mm Hg (millimeters of mercury) is considered normal. Cocoa reduced it to between 2-3 mm Hg.

But the studies lasted only two weeks, so the long-term effects are unknown. "Although we do not yet have evidence of sustained reduction in blood pressure, the small reduction we observed in the short term can complement other treatment options and can help reduce the risk of cardiovascular disease," said the researcher who led the review, Karin Ried, National Institute of Integrated Medicine in Melbourne, Australia.

High blood pressure is a common problem, being associated with 54% of heart attacks worldwide, and 47% of coronary heart disease. But experts say there are healthier ways of reducing blood pressure as the chocolate has too much fat and sugar.

There is even a warning in the medical journal Lancet that dark chocolate may contain less flavonoids than imagined since the substance can be removed for being bitter. "It's difficult to know for certain the amount of flavonoids in cocoa that would be necessary for a beneficial effect and what better way there might be to get it," says Victoria Taylor of the British Heart Foundation.

"The 100g of chocolate that would be needed to be consumed daily, according to some studies, also comes with 500 calories. This is one quarter of the daily recommendation for women."

"Beans, apples and other fruits also contain flavonoids, and even come in smaller quantities than in cocoa.  These options have fewer undesirable effects than those found in chocolate," she said. 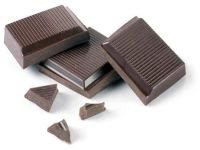