Experts quantify the time of exercise needed to protect from depression. Know what to do during this period...

A study by Southern Methodist University, Dallas, USA, was able to identify the necessary daily amount of exercise that can protect against depression: 21 minutes.

According to the researcher who led the study, Jasper Smiths, exercise appears to act on specific brain neurotransmitters like antidepressants, helping people re-establish positive behaviors.

The release of serotonin and dopamine in larger quantities results in a protective effect against pain and also in more happiness.

"It's important to find an enjoyable activity that can be maintained long term and not just until symptoms are alleviated," said Ricardo Wesley, professor of the Cia Athletica unit (Morumbi Stadium).  Aerobic exercises are the most appropriate.

"Exercise also provides a social benefit to patients, since it induces an interaction of the patient with other people," adds Dario Mathias, of the BodyTech unit (Eldorado).

The time of seven minutes is less than recommended by the World Health Organization (WHO) for those who want to get out of a sedentary lifestyle.

"Staying active is important not only for the psychological side, but to prevent problems such as hypertension, diabetes and back pain, so as to be able to live a longer and healthier life," he says.  It is also worthwhile to evaluate a few minutes of stretch training .

About 5% of the population has at least one episode of depression each year. The psychiatric disorder increases the risk of heart attack, because the depressed patient suffers severe immune and neuroendocrine changes.

See what you can do in this time:

- Walking: the brain releases dopamine and serotonin during this activity. A walk, because of not being competitive, is an ideal start. Moreover, it can be practiced by the vast majority of the population in any place without cost. It is also easy to insert into a routine.

- Light running: is also a great exercise, with the same benefits as walking, but requires willpower and perseverance. It also requires a little more physical fitness than a simple walk.

- Bicycle: is the best aerobic exercise, and therefore brings all the benefits of walking or running. But cycling has an extra benefit: it is more dynamic and to go through diverse landscapes can bring a greater sense of well-being.

Going riding? Learn how to choose the most appropriate bicycle

- Yoga: Yoga movements have a direct action on the central nervous system and bring great relaxation. The feeling of pleasure, relief and peace protects against depression.

- Weight-training: weight-training exercises improve well-being.  Therefore, it can also be a good option for those who want to protect against depression. Besides, the body becomes firmer, which will improve self-esteem. 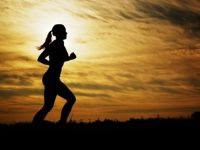