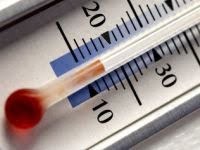 A sudden change in temperature, a feature of global warming, worries medical specialists, and can lead to a series of health complications.  According to doctors of various specialties, respiratory infections are facilitated in these conditions and the entire cardiovascular system is compromised, increasing the risk of heart attack and stroke (CVA).

Between today and tomorrow, those who live in the South will be exposed to all these consequences. In Sao Paulo, the forecast from the National Institute of Meteorology (Inmet) is that the temperature will drop 10 degrees. As of Friday (8th), it is likely that thermometers will register another 5 degrees less, a temperature range of 15 degrees over 48 hours.

When thermometers record a sudden change in temperature, one of the first parts of the body to be affected is the nose, explains the president of the Brazilian Thoracic Association (BTA), Roberto Sturbulov.

"The nasal cilia - tiny strands responsible for  filtering toxic substances that enter the body - have difficulty moving," explains the doctor.

The immobility of this part of the body that performs the "housekeeping" of viruses and bacteria before passage into the throat, pharynx, larynx and lungs, leads to an accumulation of bacteria in these regions, becoming a sponge for respiratory diseases of all kinds, such as flu, pneumonia, sinusitis, asthma and allergy.

In population groups most vulnerable to this contamination - the elderly and children under 5 years who have a poorer immune system - this increased probability of respiratory illness also brings more heart problems.

To try to overcome the infection, the body reacts by producing chemical defenses, which are inflammatory and hamper the movement of the heart. The result is a greater chance of heart attack and stroke, especially for those who already live with known health villains: diabetes, hypertension, obesity and high cholesterol.

The technicians of the Pollution Laboratory, University of São Paulo (USP) investigated the effects of thermal amplitude and found that it is the trigger on record for seven more elderly deaths per day.

In analyses done at the Information System on Mortality of the São Paulo municipality, the researchers found that on days when the temperature drops sharply and is below 10 degrees, 92 people over 65 years die, and the overall average is 75 deaths.

One explanation the authors of the study presented in 2009, at the time of publication, is that the human body is not adapted to the temperature range, and works best at temperatures that do not go beyond the comfort zone (between 21 º C and 25 ° C).

Moreover, the action of bacteria and viruses affects the entire circulation of blood, leaving the blood thicker, which accelerates cardiovascular complications.

Also with mathematical formulas, a meteorologist specializing in public health, Micheline Coelho, found another direct impact of the passing of time: on days when the temperature range is 15 degrees in 24 hours, hospital admissions for asthma increased 95%.

Despite being the most affected areas of the body, the respiratory system and heart are not the only ones affected by changes in temperature. Research has found that the accumulation of pollution - the main contributor to global warming - also means more appendicitis, impaired fertility and negative affects to the psychic system, increasing cases of depression.