Vitamin E can be bad for bones 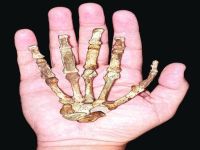 Taking vitamin E supplements can affect the maintenance of bones, according to a study by Japanese scientists released on Monday by the British magazine Nature Medicine.

The positive effects of some nutrients such as vitamin D on bone health have been well documented, but in the case of vitamin E there was controversy among scientists.

Previous experiments, as conducted in rats and published in 2010, advocated the benefits of its consumption, which would increase bone mass, and recommended intake through foods such as olive oil, almonds and vegetables such as spinach and broccoli.

However, according to a research team of Keio University, Tokyo, the bone mass of rats given large doses of vitamin E was lower than those who did not take it.

In this study, what happened in the bones of rodents with a deficit of vitamin E was compared with those who received supplements of this component.

The amount of bone mass is determined by the balance between two cell types, osteoblasts, which interfere in the creation of new bone, and osteoclasts, which degrade it.

In the Japanese study, mice with high doses of vitamin E lost bone mass, a fact that scientists consider is due to the fact that this component increases the number of osteoclasts, destroying bone instead of creating more bone.

The researchers noted that while these results may be important to prevent the risk of future fractures, it requires a deeper investigation in humans.