Morgellons disease resembles a scene from a horror movie. The entire body is itchy. Those suffering from the disease have a sensation of something crawling under their skin. Then lesions appear. When they break, colored fibers and substance similar to dark sand grains come out.

It started five years ago, when Mary Leitão took fibers that looked like dandelion fluff from an abscess on the lip of her two-year old son. After three pediatricians, three allergists, two dermatologists and multiple wrong diagnoses, she realized that her Drew had a serious problem. Sores started to appear throughout the body. When they would burst, white, blue and black fibers would come out of them. The kid complained of itching, and said that bugs were crawling under his skin. Mary Leitão continued consulting doctors, but no one believed her. 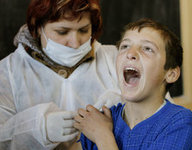 The last doctor she appealed for help, an infectious diseases specialist at Johns Hopkins University, not only refused to see Drew, but suggested that the mother had Munchausen's syndrome - a psychiatric disorder where a parent pretends that her child is sick to get the attention of physicians. Mary found out what happened to Drew in March of 2004. After her website appeared on the Internet, it turned out that she was not fighting the doctors alone. There were thousands of people like her son. Drew Leitão had Morgellons disease.

In the mid-1930s, a British physician C. Kellet argued in the journal "Annals of British Medicine" that for the first time Morgellons disease was described by French doctors in the 17th century. Then, however, it was described as black hairs growing from children's skin. The first people who suffered from this disease were the children of the Morgellons family residing in Languedoc. While the "early" form of the disease is not exactly the same as the modern one, the name has stuck.

The fibers that appear on the patients' skin are not textile fibers, as was thought at first, not worms or insects, not fragments of human skin or hair. The fibers do not appear from the outside, they are formed of substance produced in the body, possibly as a result of unknown infection.

In the laboratory the fibers were first subjected to a spectroscopic analysis, but no similarity with any of the 800 fibers registered in the database were found. Then chromatographic analysis was conducted, with the same result. The database contains nearly 90,000 organic compounds, but neither one of them look like the inspected threads. Other symptoms of Morgellons disease include chronic fatigue, forcing patients to leave work and stay home, a sharp decline in mental abilities, especially memory, severe depression, joint swelling, muscle spasms and loss of hair.

The exact number of patients is unknown to date. The site of the Center for Morgellons disease, led by Mary Leitão, has eight thousand registered users. But this, certainly, is just the tip of the iceberg. Some people do not have computers, some do not know about the Center, while others simply gave up and think they cannot be helped and intend to commit suicide. Patients reside not only in all 50 U.S. states, but also in the UK, Australia, and the Netherlands. Doctors do not know how to treat the mysterious disease. Indeed, in most cases they claim that the "insects" and fibers with grains are nothing more than a figment of a sick imagination of the patients. In medicine it is called delusional parasitosis. After this diagnosis many stop going to doctors. Patients try to treat themselves - burn their furniture, clothing and carpets, move to other apartments and homes, but the strange ailment does not go away. Some claim that Morgellons disease is a new type of biological weapon.

In late 2011, experts of the Center for Disease Control and Prevention in the U.S. conducted a new research and found no traces of an infectious agent or parasite on examination of the skin of patients suffering from Morgellons disease. American scientists believe that Morgellons disease is of psychiatric nature. Incidentally, the mysterious fibers were tested again and chemists have found that they are fibers of cotton or nylon. "We found no evidence that this is an infectious disease. Most of the patients, if sick, are sick mentally," said the study's author Dr. Mark Ebenhard.