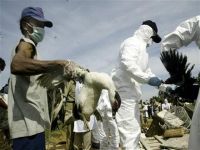 Avian Influenza, or A H5N1, has a mortality rate among humans of twenty to thirty times that of Spanish Flu which killed up to fifth million people in 1918/1919 and would be far, far worse than even the Black Death which assailed Europe in the fourteenth century. The spread of new cases is alarming, constant and deadly. Humankind must watch bird flu like a hawk...and not only.

We saw what the World Health Organization did during the Swine Flu or A H1N1 outbreak in 2009. In fact, it was more than an outbreak, it was a worldwide pandemic. The WHO limited itself to doing nothing except inform us as to what was happening as the virus swept the globe.

So what more can we expect this time as something called Avian Influenza, or A H5N1, starts to take on alarming proportions, having a hugely superior mortality rate: 344 out of 683 cases so far in 15 countries? That is a global mortality rate of over 50 per cent. If a pandemic swept the world and one third of the population became infected, then 1.15 billion people would die, according to these statistics.

The most recent case has been confirmed by the Chinese Ministry of Health, a 39-year-old male from Guiyan City, Province of Guizhou, who fell ill on January 6 and died on January 22. This followed a case in Vietnam, where 60 patients out of 120 cases have died from the disease, Indonesia, where 152 of 183 bird flu cases have been fatal (82% mortality rate), Cambodia (17 deaths out of 19 cases) and Egypt (55 deaths out of 159 cases) all in January.

The highly pathogenic H5N1 virus subtype first appeared among humans in 1997 in Hong Kong SAR, China, reappearing in 2003 and 2004. The incubation period is considered to be at least seven days, maybe as long as 17 for H5N1. Symptoms are a high fever, sometimes nausea, diarrea and vomiting, abdominal pain, chest pain, bleeding from the nose and gums and the development of acute respiratory distress five days into the disease, a crackling sound when breathing in and sometimes, bloody sputum.

WHO: The importance of monitoring Influenza variants
The World Health Organization this week reported "several human infections with variant influenza viruses currently thought to be circulating in swine populations" which have so far been contained to small clusters. The WHO also refers to the incidence of bird-to-human transmission of Bird Flu, or A H5N1, which is also contained inside clusters.

However, claims the WHO, "because influenza viruses are unpredictable, they have the possibility to change and become more transmissible among humans as shown by the emergence of the influenza pandemic H1N1 virus in 2009". The WHO therefore urges all health authorities to be vigilant and reminds them it is compulsory to report all new strains of flu observed.

Scientists create H5N1: Bird Flu - Twice as deadly as the Black Death
If A H1N1 (Swine Flu) had a high incidence rate and a mortality rate at the higher end of the normal parameters, then A H5N1 (Bird Flu) is entirely different, having a global mortality rate of around 60%. That is why scientists, for purposes of studying this strain further, have performed genetic alterations on the H5N1 virus in a laboratory environment (5 alterations) and have managed to create an airborne strain which would provide human-to-human transmission. In plain language, it would be twice as virulent and deadly as the Black Death.

The new strain produced eventually proved to be highly transmissible among laboratory ferrets, generally considered to be a good indication as to what would happen among humans, something that has the biosecurity community hearing alarm bells ringing because of a potential leak or the threat of the secret falling into the wrong hands.

Exposing ferrets to infected material from other ferrets injected with the virus, and repeating the process ten times, they managed to develop a strain of H5N1 as transmissible as seasonal flu. This latest research has horrified some sections of the medical community, which consider that is is not a good idea to turn a deadly virus into a highly contagious one, much less publish the results. For this reason the details of the research are as yet unavailable.

1918 Spanish Flu
This would not be the first time a deadly Influenza virus has been created, however. In 2005, scientists at the Centers for Disease Control and Prevention (CDC) reconstructed the H1N1 1918 Pandemic Influenza virus (Spanish Flu), which killed between 50 and 100million people worldwide. The entire gene sequence of this virus was deciphered and the scientists were able to recreate viruses with similar characteristics.

The H1N1 Pandemic Influenza virus was the worst outbreak in history and genetically, it was different from any other flu viruses that had hitherto attack humans. The US-based researcher and scientist Jeffery Taubenberger has described the 1918 virus as "the most bird-like of all mammalian flu viruses".
Food for thought. It is evident that with the constant mutations occurring to the Influenza virus, sooner or later a species leap may occur. Until it does, let us all remember a few basic steps we can take to avoid contagion.

* If you are sick, stay at home;
* Cough or sneeze into a tissue or the bend of your arm. Dispose of the tissue down a flush toilet;
* Wash the hands frequently;
* Use a sanitising hand gel regularly;
* Wipe all surfaces you touch upon arriving home with a tissue soaked in an alcohol-based substance or sanitising hand gel, namely door handles, keys, light switches and taps;
* When outside, avoid touching surfaces where the flu virus can collect, such as door handles, elevator buttons, etc. Wear gloves, use sanitizing hand gel upon arrival in a building. Avoid touching the mouth or eyes.