The dreams that predict trouble 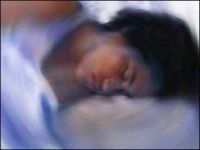 After several successive nights dreaming of a banana stuck in her throat and waking up with a clear sense of suffocation, a woman decided to investigate. What did that nightmare mean? Would it be the revelation of a hitherto hidden sexual perversion, and how would a disciple of Sigmund Freud (1856-1939), the father of psychoanalysis evaluate it?

I thought not. Instead of a psychoanalyst, I saw a doctor. He discovered that at that moment of unconscious dreaming in real life breathing stops - sleep apnea - that causes arousal throughout the night when respiration stops.

The one who unlocked the meaning of the dreamlike torment was the team neurologist Luciano Ribeiro Pinto Jr., of the Sleep Institute, São Paulo. "Unpleasant dreams such as this may occur as a result of physical discomfort or even a disease," he says.

That is, in some cases, the plot of machination of the sleeping mind can have a direct relationship with the health of the individual. Studies conducted in recent years allow one to speculate that a regular record of their content could help diagnose various problems.

Sleep is a complex neurological process. Today it is known that there are five stages of sleep through which any person sleeping is within the normal range, the period of dreams is one of the most important as an indicator of health.

In the first half of the night, slow brain waves predominate and there may be dreams of which the majority are not remembered. Then comes the range of the most vivid dreams, the so-called paradoxical phase of sleep, which is better known by its English acronym REM: Rapid Eye Movement. At this point, the body is totally relaxed, and the mind is all. A reduction in REM sleep latency is now a biological marker of depression, for example.

Speaking of depression, German researchers have confirmed that depressives tend to have dreams with more negative tones and with more unpleasant experiences. The same group of scientists demonstrated that the severity of symptoms of the disorder was directly correlated to the intensity of negative emotions in all the dreams and subjects such as aggression and death were frequent.

Besides the endless sadness, they enter the list of suspected problems that bring frights in the night: Parkinson's, Alzheimer's, schizophrenia, migraine, asthma, anxiety and bronchitis, to name a few. Problems in dreams are in fact extremely sensitive markers of mental and physical imbalances.

"Somehow the brain, while dreaming, detects altered biological processes before they even reach the consciousness," says psychologist, Peter Simor, a researcher at Semmelweis University in Budapest, Hungary. Although the studies also seek to identify patterns of dreams as to their consistency, repetition and themes, which have been shown to be more relevant to medicine, is the emotional content of stories dreamed and what the person feels upon waking.

So far, science has accumulated much more insight into the functions of sleep than dreams. For a quiet sleep, doctors recommend a relaxing ritual before going to bed: lower the intensity of light, be silent, read or listen to soft music and do not give way to thinking about problems at bed time. And if you dream, write down everything the next day. One never knows.

Sigmund Freud was the first to give a scientific character to the investigation of dream content, with the publication of the book "The Interpretation of Dreams" in 1899. For Freud, they attempt to carry out repressed desires, especially those of childhood.

As for his disciple, the Swiss Carl Gustav Jung (1875-1961), dreams were a tool of the mind in search of balance. His theory dictated that compensation, the existence of an imbalance between the conscious and the unconscious, in other words, a neurosis or psychosis, the psyche would have the mission to provide clues for the mind, in the attempt to fix - or compensate - for the problem. These clues come in the form of dreams.

The selective inhibitors of serotonin recaptivation are currently the most widely used medicines to treat psychiatric disorders such as depression, anxiety and bulimia. They can give the sensation that one is dreaming more than usual, and dreams can be more intense. But an adjustment in dose or the schedule of medication may solve the problem. Tricyclic antidepressants already decrease and suppress REM sleep.

These drugs tend to cause drowsiness and tend to shorten REM sleep. Treatment should drop after having developed a dependence or tolerance to the medication. It can also seriously alter the pattern of sleep, including increased REM, more dreams and awakenings during the night. As much as occurs with antidepressants, the rebound effect will be greater the higher the dose and duration of treatment. Nightmares are among the side effects reported by users.