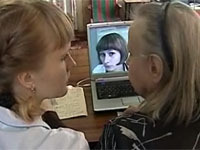 Dealing with the state-run medicine in Russia can be often endured only by a very healthy person, no matter how paradoxical it may sound. However, the situation is not that sad everywhere: in Nizhny Novgorod doctors can be called via Skype, in Astrakhan - via text messages. Why does medicine in all regions is not striving to meet the needs of the patients?

Elderly people in the Nizhny Novgorod region do not have to go to a clinic to get medical advice. Modern technology allows seniors to turn to doctors from the comfort of their homes. Older patients are visited by nurses with laptops. Via Skype program they consult with physicians and patients are given the necessary advice. "First, it was new to them, they were a little scared ... after the first communication our seniors liked it," said to "Vesti" Natalia Elizarova, a nurse with SBD "Complex Center of Social Services of Pochinok area."

According to Tatyana Markova, a general practitioner with Pochinok central hospital, this way of communicating with patients is very convenient. "We do not have to come to their homes and spend too much time. With this way of communication we can spend more time with them than we would have here in the hospital," says the doctor. However, patients are diagnosed and treatment is prescribed during hospital visits, and distance visits are used for consultations only.

In Astrakhan, authorities are thinking about the people who are unable to call in case they need an ambulance. Patients who have problems with hearing and speech can send a text message to a doctor. Memo with the numbers and the algorithm of action was provided to everyone in need. "The phone is at the reception, with an administrator and a senior doctor. They carry it in their pocket and immediately take decisions," says Peter Yaroshinskiy, chief physician of ambulance stations of Astrakhan.

According to experts, there are approximately 25 thousand deaf and mute people in Astrakhan, and for them this innovation really solves the problem. "No one thought about them. We can hear and speak, and do not notice their issues. This is gratifying that we have solved this issue quickly," said the deputy of the Duma of the Astrakhan region, Leonid Ogul.

Here is the other side of the coin. Not so long ago in Kazan, prosecutors performed an audit of the Ambulance Station. The occasion was the complaint of a local resident who was waiting for a team of doctors for over three hours.  On August 16 at 2:07pm Adel Faizova dialed "911". Paramedic crew received the information only at 5:54pm, and 10 minutes later paramedics were on site. Faizova waited for an ambulance for 3 hours and 47 minutes, and as it turned out she needed urgent hospitalization. In 2010, the resident of Sverdlovsk region Galina Danilova lost her husband, Vladimir. In the morning the man felt sick, the wife tried to call an ambulance but the team refused to come. Vladimir soon died. In the village with a population of over four thousand people there is only one ambulance team. There is an ordinance at the substation according to which travelling to neighboring villages can only be done of paramedics give a green light.

In this case, by the time the doctor reached the house of the Danilov, Vladimir could not be helped. There are reasons for the above mentioned ordinance - the drivers do not have enough gas. In addition, the old ambulance cars are only equipped with stretchers. Mobile phones were purchased for doctors by a local businessman.

Why in some regions everything is done to raise the quality of care, while in others sick people are waiting for help in vain?  According to a member of the Commission under the President of the Russian Federation on implementation of priority national projects and demographic policy Elena Nikolaeva, much depends on the organization of the process: "This is very dependent on the organization of management of medical and health care in a particular region, on the professionalism of the teams implementing new technologies and approaches. There should be a serious analysis on what can be implemented and what cannot in our circumstances. In addition, regions are not equal in terms of local budgets."

In Russia, the doctor-patient relationships are full of subtleties and nuances. Patients blame their physicians for indifference and desire to cash in on someone else's misfortune, while doctors justify it with small salaries and inadequate funding from the state hospitals, shortage of staff, medicines and medical equipment. However, it is difficult to explain the refusal to help someone in need by external factors.