Many apples a day scare dentists away 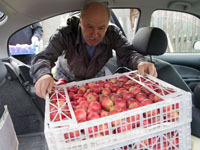 Apples, the traditionally affordable and healthy fruit for everyone, can be bad for your teeth. British scientists believe that apples are four times more harmful to teeth than carbonated drinks.

The surprising conclusion was made by specialists at King's College London Dental Institute. According to the researchers, one has to be careful when eating apples.

"It is not only about what we eat, but how we eat it, " The Daily Mail quoted Professor David Bartlett, who lead the study.

Apples bring a lot of good to the human body indeed. However, if you like to eat them slowly, the fruit acid in the apples may harm your teeth. British dentists also recommend eating apples together with cheese: calcium neutralizes acid.

The researchers paid primary attention to the connection between the diet and the condition of two millimeters of tooth enamel, as well as the hard tooth tissue known as dentin.

It was revealed as a result of the research that those people who liked to eat apples had their hard tooth tissue damaged 3.7 times more frequently than those who preferred carbonated drinks. Fruit juices raise the risk of the damage of tooth enamel four times in the gum area. Such acid liquid as beer damages dentin three times more often too.

Some sorts of apples may contain an equivalent of four tablespoons of sugar, which increases the acid balance in the mouth. Wine and beer also increase the danger of dental damage, whereas grapefruit and onions do not, Pravda.Ru reports.

It was previously reported that fruit and herbal teas could also be dangerous to teeth. As it turns out, the largest danger is hidden in lemon and black current teas that are abundant with tooth-aggressive acids.

The medications that reduce the production of saliva cause dental damage as well, Planeta news agency said. The mucous membrane of the mouth dries out because of the side effect, which decreases the efficiency of the natural dental protection mechanism. The list of such medicines includes nearly all antidepressants, ibuprofen, which is an ingredient of many pain-killing and antiseptic drugs, and beta-blockers - essential drugs for heart and hypertensive patients.