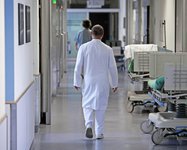 A daring medical experiment was conducted in Britain. Medics grew horns for a child to remove a large birthmark from his forehead.

Doctors offered the mother of George Ashman, a boy of five years, to implant horns in the child's forehead to remove a huge birthmark. The medics said that the horns would then be removed. The horns would stretch the skin, and the new growth would stitch together in its place, they said.

The idea was a success: the birthmark was removed in four months. However, George and his mother Karen had to endure a lot during the horn-growing process.

The boy was born with haemangioma birthmark in 2006. This is a pathology of blood vessels, which turns a part of skin into reddish soft tissue.

Karen immediately thought that her boy would be insulted and humiliated at school, that it would be extremely hard for him to find friends.

The medics implanted two small sacks under the skin of his forehead. The sacks were later inflated gradually with natural fluid until they had stretched the skin as required.

"When I first saw the implants in place I was speechless. They were larger than I expected - and placed on either side of his tiny head like horns. My cute, angel-faced baby looked like the devil. They didn't look nice at all.  But I'm really proud of the strength he has shown through all of this. He has never let it hold him back, " Karen said, according to Daily Record.

Now George has a vertical scar on his forehead, which does not disfigure his cute face at all.

A hemangioma of infancy is a benign self-involuting tumor (swelling or growth) of endothelial cells, the cells that line blood vessels. It usually appears during the first weeks of life and sometimes resolves by age 10. In more severe case hemangioma may have permanency, if not treated by a physician. Laser surgery is the most proactive way of removal in cases where patients are older then 10 years of age. In infancy, it is the most common tumor.

Hemangiomas are connected to the circulatory system and filled with blood. The appearance depends on location. If they are on the surface of the skin, they are reminiscent of a ripe strawberry (hence, they are sometimes referred to as "strawberry hemangiomas"); however, if they are just under the skin they present as a bluish swelling. Sometimes they grow in internal organs such as the liver or larynx. In most cases, hemangiomas will disappear over time. Some are formed during gestation; the most common are not congenital, but appear during the first few weeks of life. They are often initially misdiagnosed as a scratch or bruise; but the correct diagnosis becomes obvious with further growth.

Typically, at the earliest phase in a superficial lesion, one will see a bluish red area with obvious blood vessels and surrounding pallor. Sometimes they present as a flat red or pink area. Hemangiomas are the most common childhood tumor, occurring in approximately ten percent of Caucasians, and are less prevalent in other ethnicities. Females are three to five times as likely to have hemangiomas as males. Hemangiomas are also more common in twin pregnancies. Approximately 80% are located on the face and neck, with the next most prevalent location being the liver, according to Wikipedia.