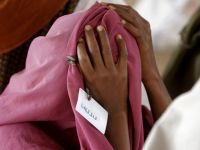 The cholera epidemic in the Democratic Republic of the Congo is spreading and has reached thousands of people, according to the UNO's World Health Organization. So far two hundred and sixty-five people have died - the UN calls it an epidemic - and it is spreading across the frontiers. As if this was not enough, DRC confronts measles and polio epidemics as well.

With the NATO countries busy spending money on weapons to bomb hospitals and to support terrorist attacks in Libya, this is a story which will only with tremendous difficulty reach the pages of the corporate press which is intent on whitewashing NATO war crimes and lying about the Libyan terrorists being unarmed civilians.

The cholera epidemic started in March in the Democratic Republic of the Congo and has now spread across the frontier to the Republic of the Congo. The WHO has reported a total of 3,896 cases in the DRC with 265 deaths as of July 20 while there are a further 181 cases suspected in the neighbouring Republic of Congo.

A WHO spokesperson declared that the UN is worried that the disease will spread along the main transport route in the region, the Congo River. It has also reached the capital of DRC, Kinshasa, where according to the Organization, "there are large population groups with inadequate safe water."

This could spell a regional disaster in the near future, for which reason the UNO has dispatched to the region two epidemiologists, a health promotion officer and a logistics expert. Cholera treatment centres are being set up in the focal points of infection by the UNO working together with the DRC government, UN and international agencies and NGOs.

According to the UNO, "Cholera is an acute intestinal infection caused by eating food or drinking water contaminated with the bacterium known as vibrio cholerae. The disease has a short incubation period and produces a toxin that causes continuous watery diarrhoea, a condition that can quickly lead to severe dehydration and death if treatment is not administered promptly. Vomiting also occurs in most patients.

"The disease remains a global threat and is one of the key indicators of social development, according to WHO. While cholera no longer poses a threat to countries with high standards of hygiene, it remains a challenge in countries with limited access to safe drinking water and adequate sanitation".

Meanwhile 1,145 children in DRC have died in a measles epidemic this year. 115,600 children have been infected. As if this was not enough, there is a third epidemic, of poliomyelitis.