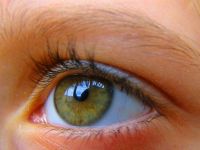 Researchers have observed changes in the retina of the deaf, which allows them to have a wider field of view, deaf people have greater peripheral vision than those capable of hearing

The idea that the lack of one sense can be compensated for by the other has just won yet another confirmation, thanks to a study that showed that deaf people see better than people of normal hearing. Researchers at the University of Sheffield, United Kingdom, found that neurons in the retina of the deaf are distributed differently, increasing their peripheral vision.

This gives them a greater insight into what is happening around. The team also noted the extension of an area of ​​the optic nerve, which shows that deaf people have more neurons transmitting visual information.

The team analysed the retina of adults who were born deaf or became deaf early in life. According to Charlotte Codina, author of the study, although all retinal cells are already present at birth, early in life, they are not located exactly where they need to be and can move in the first year of life.

The deaf, compared to persons able to hear, had fewer neurons targeted for central vision and most of them for peripheral vision. "It seems that this pattern among the deaf is changed to facilitate peripheral vision. Probably the neural connection to the optic nerve is prioritized, since there is no competition for the auditory information," said Ms. Codina.

The study published in the journal Plos One is the first to connect hearing loss with changes in the retina. "The retina should be more plastic and interactive than we thought and this affects how we understand vision," she said. However, as the study was conducted only with people who were born deaf or lost hearing in childhood, it is uncertain if the retina also changes in adults who went deaf.