Smallpox stocks: To destroy or not to destroy? 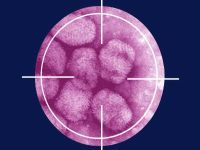 This week the World Health Organization decides whether to recommend that the last two (official) stocks of smallpox virus, in the USA and Russian Federation, should be destroyed or kept for further research.

The last known case of smallpox (Variola) was in 1978, in Birmingham, England, after a laboratory accident. One person died and a "limited number" of people were infected and successfully treated (according to the WHO). Before that the last known natural case took place in 1976 in Somalia. In 1979, smallpox was declared by the WHO to be officially eradicated after a successful worldwide vaccination programme.

Since then, there has been a gradual reduction of stocks, today concentrated in two locations - the US Centers for Disease Control and Prevention in Atlanta, Georgia, USA and Russian State Research Center of Virology and Biotechnology in Koltsovo, near Novosibirsk, Russian Federation. 1993 was set as the date for the final elimination of the stocks to guarantee that no further accidents could occur - or that samples could get into the wrong hands.

However, since then the debate has raged among scientific circles as to whether the stocks should be maintained to help in research or to use if an outbreak of smallpox suddenly appears as the disease re-emerges.

The stocks of variola are used to study the way the virus and its family, orthopoxvirus, interacts with the human immune system and from there, scientists can extrapolate information to use on how other diseases react with the human body.

The argument in Geneva this week with stem around the perceived risks and benefits of maintaining stocks. Many developing countries regard the maintenance of stocks a useless waste of money, while many developed nations regard them as a guarantee against possible terrorist attacks, especially since these days the virus can be recreated from its genome.