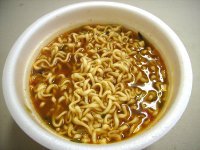 "Instant" oats for breakfast, "instant" soup for lunch, "instant" noodles for dinner. Fast food has long taken place in the diet of bustling Russians. The convenience is evident. Yet, is it healthful? And for how long one can "fuel" the body with fast food?

A German pharmacist Henri Nestlé has done many things. He sold licorice candies and made vinegar, pressed oil and made mustard, and sold home-made fruit liqueurs. Yet, the real fame came to him after Nestlé produced dry milk formula for babies.

The wife of Mr. Nestlé could not have children of her own, but she enjoyed playing with the children of the factory workers of her husband. Once she complained that babies often do not have enough breast milk. Henry thought about creating a substitute. However, evil tongues claimed that the reason was not Nestle's love for children but rather the banal greed of the entrepreneur - the women were forced to leave their work spaces too often to feed babies. In any case, Henry managed to create an alternative to breast milk. The baby formula was followed by powdered milk for adults, and quick meals.

For obtaining instant oats, the grain is turned into flakes and steamed. As a result, it loses vitamins and minerals, as well as a significant portion of fiber required by the body for digestion and normal composition of intestinal microflora. However, all starch contained in the grain remains. This means that people gain weight faster consuming instant oatmeal and buckwheat. To improve the taste of instant cereal, manufacturers often add sugar and flavorings

Japanese Momofuku Ando was released from prison where he spent several years for tax evasion immediately after the Second World War. While in prison, Ando was dreaming about eating something tastier than prison food. But the country was starving, the Japanese government encouraged its people to eat bread, while rice and noodles were deficit. It was then that Ando undertook some experiments. He wanted to create food that did not spoil for a long time and could be cooked quickly. The entrepreneur conducted experiments in his own kitchen. He tried to dry and jerk the noodles, cook it in different modes, but instead of delicious dishes it turned into something resembling glue. Once, the experiments yielded successful results. Momofuku fried the noodles soaked in palm oil and dried them.

This was the birth of the favorite food of students, travellers and singles - instant noodles. The Japanese were so pleased with the invention of Ando that they have turned it into a museum piece. The noodles museum in Osaka teaches about the life of their inventor, one can participate in the process of cooking and tasting the results.

Palm oil used for frying the noodles is not the most healthful product. It increases the level of cholesterol and causes the formation of vascular plaques. In addition, scientists believe the noodles abuse could lead to excessive weight.

According to the label on the package, 100 grams of noodles has 455 calories. But, despite such a high nutritional value, it is not very feeling. It is very simple: very finely ground flour is used to make noodles as it is cheaper and, most importantly, is absorbed instantly. The consumer feels hungry again and opens another package.

The spices added to the noodles make it too hot and salty. Therefore, instant noodles are not recommended for those who have stomach problems, kidney issues and high blood pressure. Preservatives in the instant noodles are more common than vitamins and minerals. However, Momofuku Ando lived 96 years, eating mostly his own invention. This can be explained by rather strong health of the Japanese rather than healthfulness of his noodles.

Swiss miller Julius Maggi who was born in the late 19th century was very fond of his work and sought to turn everything into flour. One day, Mr. Maggi was struck by a great idea - to cook flour made from dried vegetables. He delivered special equipment to his mill, ground dried beans and peas, and obtained his first sample of instant soup. Female cooks quickly appreciated the invention of the miller as they could quickly add water to the vegetable flour and feed their hungry husbands.

Maggie prepared not only soups on the basis of dried vegetables but also seasonings, flavoring flour generously with dry herbs and spices. However, the miller's enthusiasm was not going to stop there. Vegetables were followed by meat that was cooked, dried, and also converted into a powder, which is still sold as familiar bouillon cubes. This triumph came to Julius Maggi during World War I. His cubes became an indispensable attribute of the Army rations, and Maggi soon amassed a huge fortune on his instant soups.

One cube contains a third of the daily norm of salt. The fans of quick soups often suffer from high blood pressure and have kidney problems.

Another danger is the abundance of sodium glutamate. This dietary supplement that boosts the taste of products is known under the code E621. Scientists still cannot tell with certainty what the consequences of consuming a large amount of this substance are. Some believe glutamate is completely safe and even believe that the additive is good for the brain, others believe the E621 is the cause of gastritis, duodenal ulcer, blurred vision and increased risk of cancer. And, of course, do not forget about the abundance of preservatives in bouillon cubes. Preservatives are suspected to cause allergies and reduce the body's resistance to disease and adverse environment.

Scientists have found that regular consumption of fast food is addictive, and can be compared to the dependence on cigarettes. For example, a person who is used to cook soup from bouillon cubes or simply reheat the contents of a bag in the microwave can barely perceive the natural taste of beef broth. After the spices and salt ample in instant soups, plain broth seems too bland.