Malaria: 50% of the world's population at risk 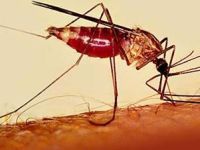 As we move towards World Malaria Day - April 25 - let us be aware of the tremendous social and economic impact of this disease, which today may be a scourge in tropical countries - but which used to be endemic in the northern hemisphere and may well return with global warming. And remember...it killed King Tutankhamun.

Malaria is a lethal disease which kills over one million people a year and infects between a quarter and half a billion others. The main incidence (1) is in sub-Saharan Africa, where one child dies every 45 seconds of malaria but it is also endemic in Latin America, Asia, the Middle East and parts of Europe, which in Roman times was responsible for millions of deaths. Indeed, the disease has been blamed by some scholars (2) as being one of the main factors behind the decline of the Roman Empire, during a cyclical temperature spike called "the Roman High".

According to Margaret Humphreys (3), "Malaria could generate a life expectancy of only twenty or twenty-five years among valley folk, while a few miles away on a windswept mountainside the people lived twice as long. This fact was not lost on ancient observers; in the most heavily malarious areas only slave labor could be forced to harvest crops from the fertile soil".

With world temperatures again rising, whether due to cyclical vectors connected to the Earth's tilt and corresponding ocean current flows, or due to the industrial activity of mankind, this means that areas which today are unaffected by this disease could see Malaria becoming endemic in the near future.

2) for new donors to join a global partnership against malaria;

3) for research and academic institutions to flag their scientific advances to both experts and general public;

4) for international partners, companies and foundations to showcase their efforts and reflect on how to scale up what has worked.

Malaria is a scourge. Apart from the human toll, which affects mainly children (most in Africa), this disease, caused by Plasmodium parasites which infect people through the bite of an infected Anopheles mosquito, has tremendous social and economic impacts. In countries with high incidence rates, it can reduce GDP by up to 1.3%.

A temperature, headache and vomiting set in between ten to fifteen days after infection - and today there are numerous cases registered of multi-resistance by parasites. Yet the disease is preventable: treatment with artemisinin-based combination therapies; use of insecticidal nets by people at risk; and indoor residual spraying with insecticide to control the vector mosquitoes.

(1) Information from WHO - World Health Organization

(3) Margaret Humphreys, "Malaria and Rome; A History of Malaria in Ancient Italy"