Egg is healthy for you, says study 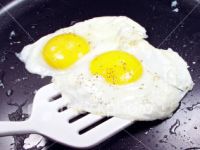 The egg can be healthy for you, according to a study of the Research Service of the U.S. Department of Agriculture

For anyone who loves eggs but avoids them because of the cholesterol, the good news: it may be healthy after all. The conclusion comes after a study by the Research Service of the U. S. Department of Agriculture.

The increased content of vitamin D, which helps protect bones, reached 64% more. There are now 41 International Units, up from 25 IU measured several years ago.

Eggs contain all of the essential amino acids the body needs for cell growth and repair. Eggs are also a good source of B12 and iron. They are low in saturated fat (1.5 grams). Most of the fat in eggs is of the healthy, unsaturated variety. Add to this list protective antioxidants (vitamin E and carotenoids) and folate (which helps to lower homocysteine). Eggs are also thought to raise the level of "good" HDL- cholesterol.

The reason for improvement is the change in chicken feed. Despite this finding, the daily recommended limit remains just one egg per day.