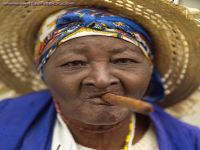 Cubans are proud of their longevity, and the sharp mind of Fidel Castrol is a prime example. Certainly the totally free and complete medical care and stress free environment contribute greatly to length and quality of life, as does the the availability of community recreational, cultural and educational programs. A family doctor can be found on every block.

A methodical life with varied food habits, which does not exclude tobacco, coffee or sex, would be the "secret formula" to achieve satisfactory longevity, according to a recent study of more than 50 people over a hundred years old in Cuba.

A study of 54 centenarians, over 100 who live in Villa Clara, about 270 kilometers east of Havana, showed that 95% of the elderly have "a varied food habit" based on fish meat, eggs, milk, red meat and vegetables seasoned with natural spices and a little salt.

The study was coordinated by Dr. Nancy Nepomuceno, who presented the results of the work while inaugurating a National Workshop on Geriatrics to begin operation in this city.

The majority of respondents hold "a lucid state of mind" and were former farm workers, while more than 60% of them were children of people who also surpassed the one hundred years mark, highlighted the media.

Another common feature is the fact that they led a very methodical life. None expressed addiction to alcohol, but, some "drank too much coffee and smoked tobacco," the source added. Dr. Nancy also emphasized that centenarians retain their interests and motivations "including that of a sexual nature."

The workshop seeks to exchange experiences in treatment of adults on how to increase longevity in Cuba, where the expectation at birth is greater than 76 years. The province of Villa Clara boasts the highest life expectancy in the country, over 78 years.

Cuba, with 11.3 million inhabitants (2005), has a large number of centenarians including 2,500 people, mostly women. The country's oldest person, Benito Martinez Abogán, also of Haitian nationality, reached the age of 126 years on June 19 this year.

The country also has an initiative called the "120 Years Club," which aims to achieve more than a hundred members of all ages with themes such as nutrition, healthy habits, physical and intellectual activities. (ANSA) The government says it wants Cuba to become the world leader in life expectancy, vying with the 82-year average for Japan and Singapore.