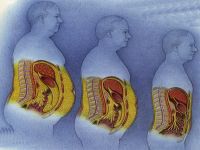 The accumulation of abdominal fat is an independent risk factor from weight.

The accumulated fat at the waist is associated more with chronic diseases than that present in the hips. Several studies have suggested that the numerical ratio between waist and hip can predict the risk of illness, more accurately than weight or body mass index (BMI = weight / height x height).

The abdominal circumference should be measured at the narrowest part of the waist or from the point at half the distance separating the ribs from the top of the iliac bone. The circumference of the hips should be made at the point of greatest horizontal diameter.

Although the association between these measures and the onset of degenerative diseases has been demonstrated in several studies, its association with the risk of death was unclear.

To clarify this issue, just published by the European Prospective Investigation into Cancer and Nutrition (EPIC), a study followed 359,387 women and men aged 25 to 70 years (mean age = 51.5 years), in ten European countries, during an average period of ten years.

All participants were measured (height, weight, waist circumference and waist / hip) and completed questionnaires to give information about their sociodemographic characteristics and lifestyle, medical history, smoking, alcohol consumption and physical activity.

The relative risk of death from cardiovascular disease is higher for women and men with higher BMI. Deaths from respiratory diseases were already associated with higher values of waist circumference or waist-to-hip ratio.

Fat is not just a storehouse for energy to be mobilised in lean times. Adipose tissue is metabolically active, particularly those deposited from the viscera. It secretes inflammatory mediators potentially linked to the development of chronic diseases. This property explains why abdominal fat increases the risk of death even in those with lower BMI.

Fat is the waist area has been shown to cause:

* Hormone balance upset due to an abundance of inflammatory chemicals.

* More inflammatory chemicals because "high-octane" fat as a form of fuel is sent directly to the liver, which in turn releases chemicals.

* Creates inflammation (a serious health risk) by giving internal organs fuel. Fat is the first source of fuel for all internal organs, not only the liver.

The waist / hip ratio has less clear connotation with the BMI and may be only a marker of fat distribution.

The large number of participants in the European study has demonstrated that waist circumference is a risk factor independent of body weight and BMI. People who are in the normal BMI range, but have excess accumulation of abdominal fat, should be just as concerned as those who are overweight.