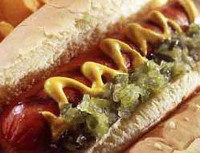 Some foods that are considered "bad" are usually blamed for containing excessive amounts of calories and, consequently, contributing to weight gain. However, there are foods that literally kill. The most terrifying villain is a common hot-dog.

Children who love to snack on a hot dog often die from asphyxiation. American Academy of Pediatrics has issued a policy statement on the matter.

The academics, in particular, offer manufacturers to redesign hot dogs and place warning labels on the package explaining the dangers of asphyxia. According to statistics, 17 percent of deaths of suffocation in children under ten are caused by a hot dog. However, the Academy did not say anything about specific changes to be made to the shape of the snack.

Everyone knows about dangers of fugu fish. It takes a chef at least three years to learn to cook it, and even then the skill is not a guarantee. Paper-thin slices of fugu embody both the luxury and excitement: the poison contained in one fish is enough to kill three dozen people since tetrodotoxin is 1,200 times more powerful than cyanide. Surprisingly, neither the danger nor the high price of the fish (approximately $200) scares the fans away - every year nearly ten thousand tons of fugu is consumed in the world.

Aki, the fruit of a tropical tree Blighia sapida is considered the national fruit of Jamaica, although it originated in West Africa. If you do not know all the subtleties of cooking Aki, you can easily get poisoned, which often ends in a coma and death. Unripe fruit contain poison hypoglycin, that is why a chef cooking Aki must ensure that the pods of the fruit are red and open. Only yellow flesh of the fruit is consumed, and in Jamaica it is traditionally served with codfish. The black seeds that look like olives are toxic.

The most unexpected participant of this list is ordinary peanut. One percent of the world's population suffers from peanuts allergies. Peanuts are the most common cause of death as a result of allergic shock. From 1997 to 2002, according to the estimates of the American Academy of Allergy, Asthma and Immunology, the number of children with allergies to peanuts has doubled.

Greens also hit the rating of deadly products. Spinach, lettuce and arugula fell victim to Nirovirus, a loyal friend of unwashed hands and inept cooks. Of 363 cases of poisoning with vegetables 240 fall on the greens. Escherichia coli and Salmonella also often settle on the greens, especially if they are grown in greenhouses and on farms, where contact with manure, wildlife or dirty water is very frequent.

Rhubarb is a popular component of cakes and jellies. In Asia it is used as a medicine for treating certain diseases, but in larger doses it can cause poisoning. Rhubarb salads should be avoided as they contain too many toxins.

Tuna is loved by school and college students, it is one of the most popular fishes in the world. However, tuna has dubious reputation. According to studies conducted in 2004, consumption of tuna during pregnancy increases risk of miscarriage or stillbirth. In the best case, the child will suffer from nervous system disorders. If tuna meat is stored improperly, it accumulates toxins that are similar to those found in fugu, although not as dangerous.

Americans know about tapioca pudding since childhood, but preparation of this dish requires a certain skill. Improper cooking treatment is fraught with accumulation of cyanide in tapioca. According to the American Cancer Society, the most susceptible to tapioca are people who are allergic to latex or rubber.
The presence of mushrooms on this list is unlikely to surprise anyone, but it is better to remind that the "wrong" mushrooms can not only cause hallucinations, but also kill. It is a pity that mushrooms grow without labels in the wild.

Coffee lovers are unlikely to abandon the drink, but it would be helpful to know that it causes heart palpitations, insomnia, and teeth darkening. Or, we can spill it on ourselves, which is not pleasant. In 1992, for example, 79-year-old visitor of McDonald's Stella Liebeck spilled a cup of coffee with a temperature of 170 degrees (Fahrenheit) on herself. She had third degree burns on six percent of the body. Liebeck was paid 2.86 million dollars by the company who then began making less scalding coffee and placed warning labels on the cups.