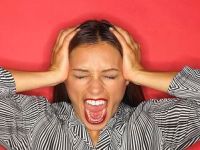 Also known as PMS, is a set of physical and behavioral symptoms that occur in the second half of the menstrual cycle that can be so severe that they interfere significantly in women's lives. PMS is a disorder with symptoms that affect women's in the biological, psychological and social areas.

The trend today is to believe that the physiological function of the ovary is the trigger that sets off the symptoms of the syndrome by altering the activity of the serotonin (neurotransmitter) level of central nervous system.

Treatment depends on the severity of symptoms and include dietary and behavioral changes, as well as drug treatments.

Anxiety (mood alteration with feelings of hostility and anger

Fluid retention (swelling or pain in the legs)

Desires for certain foods like chocolates, sweets and salty foods.

There must be a goal to control of the menstrual cycle for at least two cycles. It should be ruled out from other possible disorders such as hyperthyroidism or hypothyroidism, menopause, migraine, chronic fatigue, irritable bowel syndrome or premenstrual exacerbation of psychiatric diseases; depression, which can intensify during this period (premenstrual magnification).

Drug treatment includes the specific management of each symptom and should be individualized. Most drug treatments offered were not more effective than placebo treatments (progesterone, spironolactone, evening primrose oil and vitamins B6 and E, calcium and magnesium). Fluoxetine was the only drug that was effective, though it was only FDA-approved for PMDD (most severe form of PMS, with a prevalence of symptoms of anger, irritability and tension). In Europe the drug is not approved for use even in PMDD.

Preventive measures are also important and include:

*orientation: explaining that PMS is not serious and the symptoms can vary with each cycle
*food changes with reduced fat, salt, sugar and caffeine (coffee, tea, cola-based) are recommended
*Fractionation of meals
*diet with good sources of calcium (milk and yogurt) and magnesium (spinach), decreased alcohol intake
*quit smoking
*getting regular exercise (aerobic: 20 minutes 3 times per week)
*stress management

Questions you can ask your doctor:

Is what I feel in those days before the menstrual period "things in my head"?
Can the unpleasant symptoms that occur before menstruation be considered a disease?
Is there no treatment for the premenstrual syndrome?
What is the criterion to determine the severity of PMS?
When is PMS characterized as premenstrual dysphoric disorder?
When do you need psychiatric support for PMS?
Physical exercise and relaxation helps in the treatment of PMS?
What foods are best suited for these days?
Will the use of food supplements or vitamins help in improving symptoms?
Should I stop using alcohol and cigarettes?