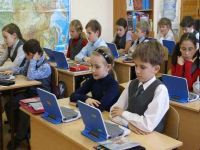 A worldwide flu epidemic is underway, and it's a very debilitating flu. You get all the usual symptoms in the most severe fashion and just when you think you're ready to go back to your regular daily routine, you get a relapse. Although 30 percent of the Moscow population has been vaccinated against the regular flu, 92,000 Muscovites are currently suffering from the flu or respiratory infections. More than 52,000 of them are children.

There have been only a handful of school children attending classes. That being the case, starting this Monday (31st) nearly 500,000 school children will get a week-long vacation in the first such shutdown to strike Moscow since 1998. Some schools had already closed down on Friday due to high absenteeism.

"The cold and flu rate in Moscow grew by 1.5 times in the week from January 17 through 23, and 57.2 percent of the patients are children," Filatov said.

"The cold and flu rate is the highest amongst schoolchildren; it is 42.6 percent higher than the epidemic threshold," he further noted.

The order affects more than 1,500 public and private elementary schools. This order does not affect older children. Two other cities also closed their schools, this being the worst flu outbreak in central Russia in over a decade.

However, parents were also warned to avoid public places and contact with large groups as well.

To minimize the likelihood of catching it and to prevent any contagious disease, build up your immunity by eating right, getting enough rest and sleep, exercise regularly and wash hands often, especially after touching public phones, ATM machines, shopping carts, doors and such. Avoid touching your face until you do wash your hands. Make hand washing the first thing you do when you get home and before meals.

In addition, persons at high risk should try to avoid crowds when flu or disease is at its peak and persons who are ill should not leave their homes.