New research states that Tuesday is the most stressful day of the week. With the global economic crisis, stress levels are peaking among people who would normally be the carefree life and soul of the party. Here are some home truths and some tips as to what to do... 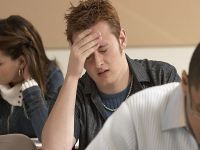 New research unveiled by a British newspaper* reveals that the most stressful hour and day of the week is 10.00 in the morning on Tuesday. This stress peak is due to an accumulation of work, such as emails, after a more relaxed Monday during which employees caught up on weekend chatter, the latest movies and soccer results.

For whatever reasons, stress is debilitating and it is a condition that can kill. Specialists suggest a number of ways in which a person can reduce or combat stress.

There are a number of ways in which to reduce stress, apart from having a healthy diet and avoiding foodstuffs which interfere with sugar and water levels and sleep. One, according to experts, is light exercise, be this yoga, walking, playing games or, even, laughing.

Another important point is that stress is not caused by what we are confronted with, but by our reaction to it, so facing things in a different way and coming to terms with it, being satisfied with what we have, is a technique many claim helps to reduce stress levels.

"Think positive" is a catch-phrase, as is "Think about something else", breaking the chain of thought that leads up to stress. Thinking of successes, thinking of past victories and convincing oneself that one can always react positively can help the brain to take a break and turn a negative situation into a positive one.

Deep breathing, from the diaphragm (or belly) is another technique which works for a lot of people; others suggest stretching to reduce muscular tension and after arriving home, taking a hot bath increases circulation and oxygenation...and why not take a bath to the sound of some relaxing music and make this magical moment part of the day, something to look forward to?

If we are what we eat, nutritionists suggest eating a hearty breakfast to stabilise blood sugar levels, even if this means grabbing a previously prepared juice and sandwich or boiled egg on the way out.

Caffeine is not good; in large quantities, it dehydrates and interferes with sleep patterns. Nutritionists suggest swapping coffee for green tea, which has a soothing effect and is a useful anti-oxidant. Similarly, swapping colas for sparkling water hydrates instead of dehydrating the system.

Healthy protein-rich snacks during the day help to combat fatigue...and instead of going out to feast on junk food, experts advise taking a packed and healthy lunch from home.

Easy to do and not very time consuming.