Haiti one year on: The UN presents its report

On January 12, 2010, a massive 7.0 earthquake devastated Haiti, killing 220,000 people outright, leaving a further 1.5 million homeless and destroying the infra-structures in most of the country. One year on, the United Nations Organization presents a study of the situation. 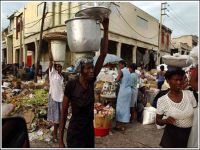 "In retrospect I think we can say that by and large the initial response to the earthquake was a success, stated Nigel Fisher, the UN Humanitarian Coordinator for Haiti, whose general impression was positive, a lot having been achieved with international aid, although much needs to be done and "things could have gone quicker".

Around 72 per cent of the financing requirement for emergency relief was delivered, to the tune of around one billion USD, although the 400 million-USD shortfall did affect certain sectors, while camp coordination and management was "critically under-funded" according to the UN report.

Nevertheless, 95 per cent of the children in the earthquake zone have returned to their classrooms; 700,000 people (around half) have left the camps, 100,000 of these having moved to transitional shelters while others have gone back to their homes, living in their yards because they are afraid of concrete collapses.

That leaves 810,000 people still living in the 1,150 camps. For 2011, 3 billion USD in aid has been approved; 1.28 billion has already been funded while a further 1.63 bn. is pledged. However, according to Nigel Fisher, the task ahead is a multi-year challenge.

One of the main challenges could be electoral unrest in January, during the second round of the Presidential election, due to the fact that the two candidates to reach the second round, former First Lady Mirlande Manigat and Jude Celestin, candidate of ex-President René Préval do not garner a great deal of support among certain sectors of the population who accuse the authorities of vote-rigging to exclude the popular musician Michel Martelly.

A further problem may be the continuation of the cholera epidemic, estimated to reach 400,000 people in its first year ending in October. It has so far killed around 3,600 people and the death rate has fallen from 6 to 2.2%. The cholera campaign is vastly under-funded, having received just 44 out of 174 million USD needed, meaning that 2.2 million schoolchildren are at risk of catching the disease.

As usual, the UNO does what it can with the resources available. While perhaps it did as much as humanly possible in this first year, if funding had been at the 100% benchmark of what was pledged, things could have been and could still be better still.