Compounds in tea are effective after digestion, according to new study 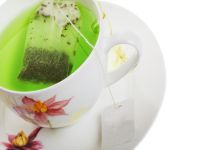 A study by Newcastle University in Britain, indicates that green tea may protect the brain from diseases such as Alzheimer's and other types of dementia. The research, published in the journal Phytomedicine, also suggests that the ancient Chinese remedy that has been popularized throughout the world may also have an important role in protecting the body against cancer.

In the study, scientists investigated whether the beneficial properties of green tea, which had already been proven in newly prepared and undigested tea, were still active once the tea was digested.

According to Ed Okello, a professor at the School of Agriculture, Food and Development, University of Newcastle, who led the study, digestion is a vital process to get to the necessary nutrients, but it also means that the compounds might not always be the healthiest of foods that will be absorbed by the body and may be lost or modified in the process.

"What was really encouraging is that this study found that when green tea is digested by intestinal enzymes, the resulting compounds are even more effective against the triggers of Alzheimer's and more important than the undigested form of tea," he said. "Besides, we also found that the compounds of digested (green tea) had properties against cancer, significantly slowing the growth of tumor cells we used in our experiments," he added.

In research, the team at Newcastle University worked with scientists from Scotland, who developed a technology that simulates the human digestive system. Thanks to this technology, the Newcastle team was able to analyze the protective properties of the products of digestion from tea.

Two compounds are already known for their role in the development of Alzheimer's, hydrogen peroxide and a protein known as beta-amyloid. Previous research has shown that compounds known as polyphenols are present in green and black teas, that have neuroprotective properties, because they bind to toxic chemicals and protect brain cells.

When ingested, polyphenols are broken and produce a mixture of compounds. It was these compounds that the scientists tested for Newcastle. "It's one reason why we have to be so careful when we make statements about the health benefits of various foods and supplements," said Okello.

"There are certain chemicals that we know are beneficial and we can identify the foods that are rich in these compounds, but what happens during the digestion process is crucial as to whether these foods are even doing well," he said.

The scientists used models of tumor cells by exposing these cells to various concentrations of different toxins and the compounds in digested green tea. "Chemical compounds from digested (tea) protected the healthy cells to avoid being destroyed by the toxins," said Okello.

"We also observe that they affect cancer cells, slowing their growth significantly." "Green tea has been used for centuries in traditional Chinese medicine, and what we have here gives scientific evidence of why it can be effective against some of the most important diseases we face today," he added.